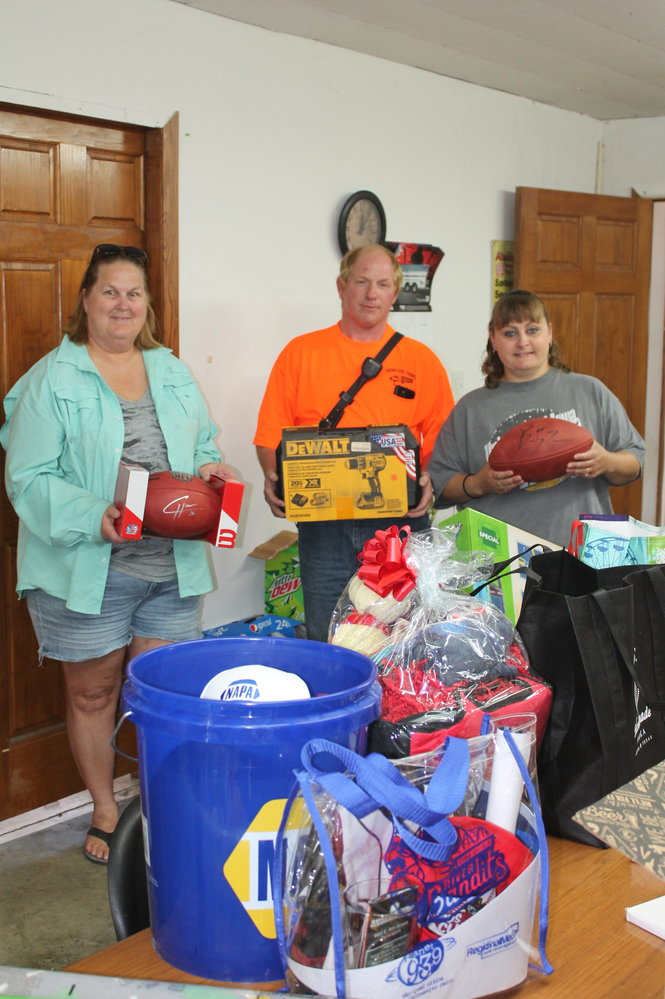 The Atalissa Fire Department hopes to raise thousands of dollars this weekend to put toward a new tanker fire truck with their Atalissa Day fundraiser that includes all kinds of family activities and fun. Here, Gina and Scott Skubal as well as Karen Feddersen show some of the items to be presented for the live auction to begin at 6 p.m. at the fire station including autographed NFL footballs.
Index photo by Tim Evans
Posted Wednesday, June 22, 2022 10:10 am
Tim Evans, Index Editor

Hoping to raise enough money to buy a used tanker fire truck, members of the Atalissa Fire Department are putting together their annual all-day Atalissa Day fundraiser on Saturday, June 25.

“A new truck can be nearly $400,000,” said Karen Feddersen, noting this is the department’s first step toward getting the tanker which will hold 2,500-3,000 gallons of water, something she said fire fighters definitely use in a rural district like Atalissa where water isn’t always handily available. The tanker unit the department has in their possession isn’t operational, an old model that has “mechanical issues.”

Hundreds of local residents are expected to come out to support the local fire department of 19 members as they host the all-day event that begins at 8 a.m. with a breakfast being served by the first responders at the fire station in the center of the community until 11 a.m., serving breakfast burritos and a casserole dish.

The day includes a corn hole tournament, car show, kids’ events including a tractor pull, an afternoon parade, auctions, lunches and dinners, a dance and fireworks at dusk.

The corn hole tournament opens the day with registration for two-person teams from 8 - 9 a.m. near the fire station, where about 30 - 40 teams are anticipated by the event organized by the Pearl City Baggers of Muscatine.

A car show, which will include awards for various models, will begin at 9 a.m. and run through 2 p.m. with over 100 vehicles expected for the show put on by Mike Smith of Muscatine.

A silent auction begins at 9 a.m. and will run through 4 p.m. that day at the fire station, with opportunities to bid on passes to the Iowa State Fair, gift certificates to various businesses, gift and themed baskets, and other items. Anyone interested in donating toward the auction can contact Feddersen at 563-357-3036.

The fire department will serve grilled hamburgers, cheeseburgers and hot dogs for lunch beginning at 11 a.m. at the fire station before the kids’ games begin at noon with a bounce house, bubble blowing, face painting and bean bag toss.

A kid’s tractor pull begins at 1 p.m. near the fire station, put together by volunteers of the West Liberty Lions Club.

A parade line-up will begin at 3 p.m. on the corner of Lynn and Depot Streets, with an anticipated 20-plus entries marching down Cherry Street beginning at 4 p.m. Mayor Angie Dickey is in charge of arrangements, where four women of the community will be honored as grand Marshalls for their support of the fire department including Sue Rock, Barb Rock, Bunny Willets and Sandy VanDusen.

The silent auction bid winners will be announced at 5 p.m. while the fire department serves a pulled pork dinner that will include two side dishes again at the fire station. Parishioners of the Cedar Valley Church in rural West Liberty will be providing desserts for the Saturday evening dinner.

A live auction conducted by auctioneers Donovan Yoder and Don Dickey will take place from 6 - 7 p.m. at the fire station with items from professional sports teams including the Minnesota Vikings, Green Bay Packers, Minnesota Twins and Chicago Bears. Other auction items include seed corn, half hogs with processing and a quarter beef.

A dance, featuring the country/rock band North of 40, will play from 8 a.m. to midnight at the event, with a fireworks show at dusk, a first-class homemade show put on annually by Afredo Plata.

Atalissa Day started in 1976 and ran through 2008 before it was suspended due to flooding in the community. The department brought the event back in 2017 and has been hosting it annually since.