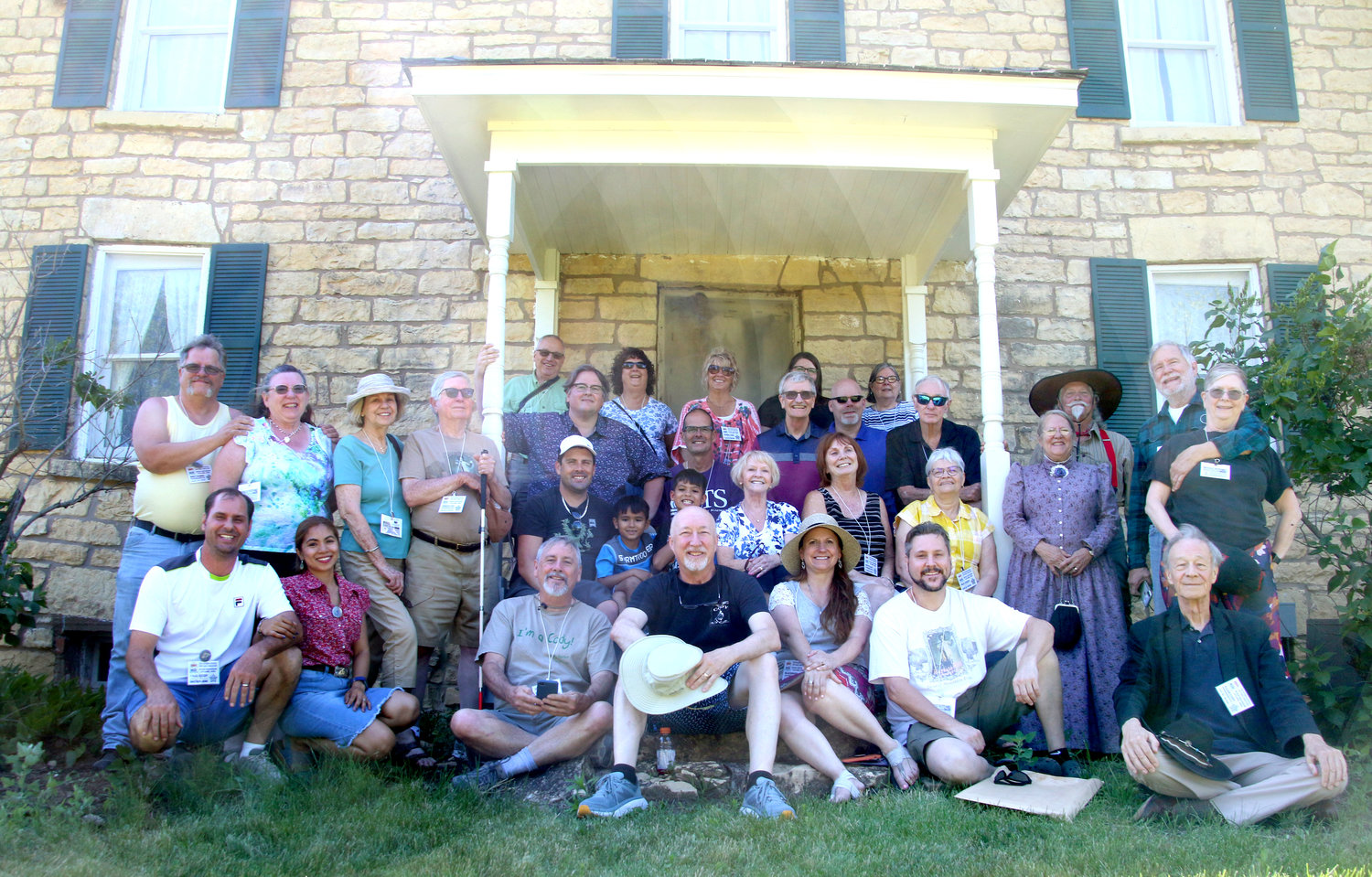 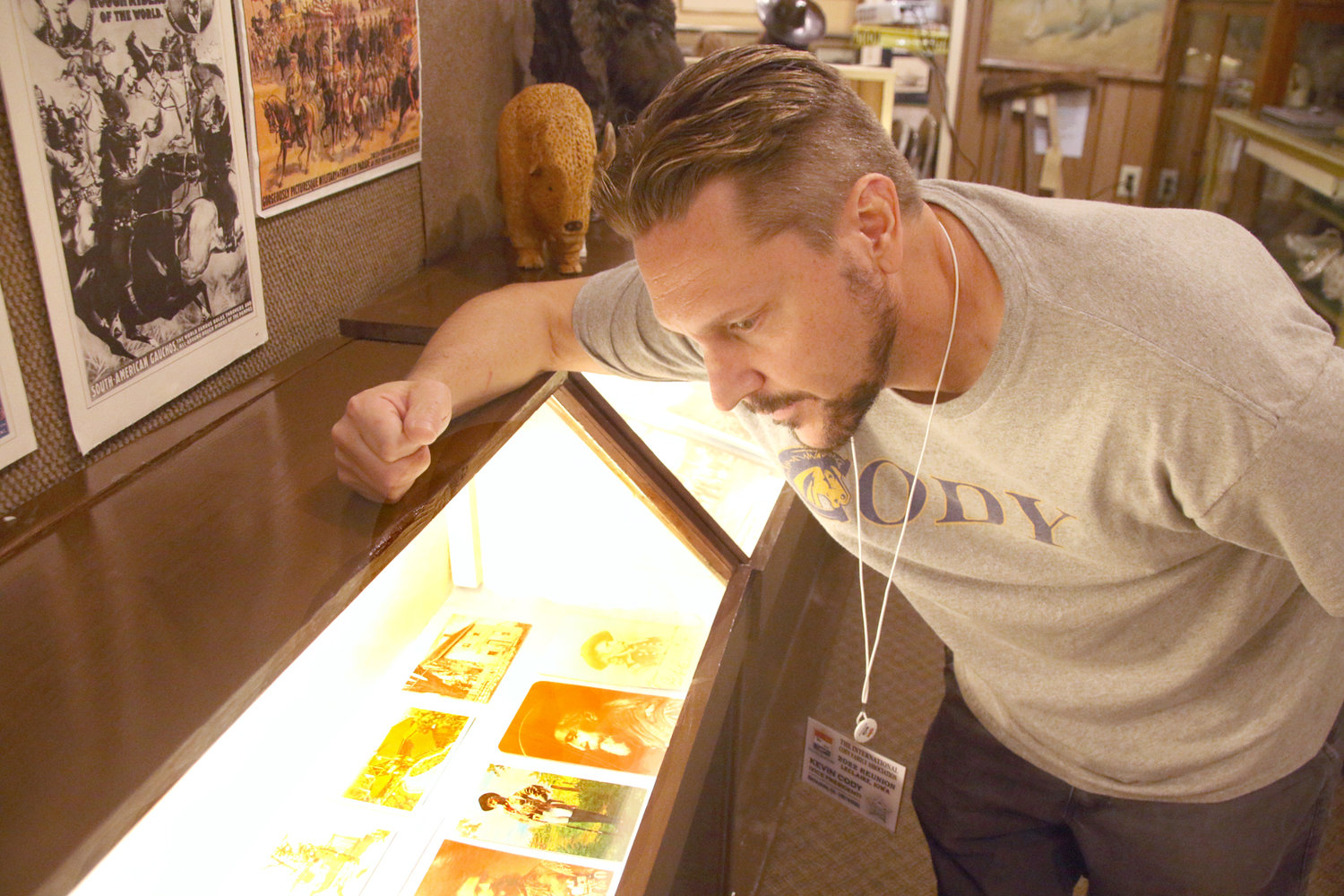 Kevin Cody, originally from Cody, Wyo., examines artifacts at the Buffalo Bill Museum in LeClaire. The Cody family has over 3,000 pieces of Buffalo Bill memorabilia in their own collection and acquired some more in Iowa.
Mark Ridolfi 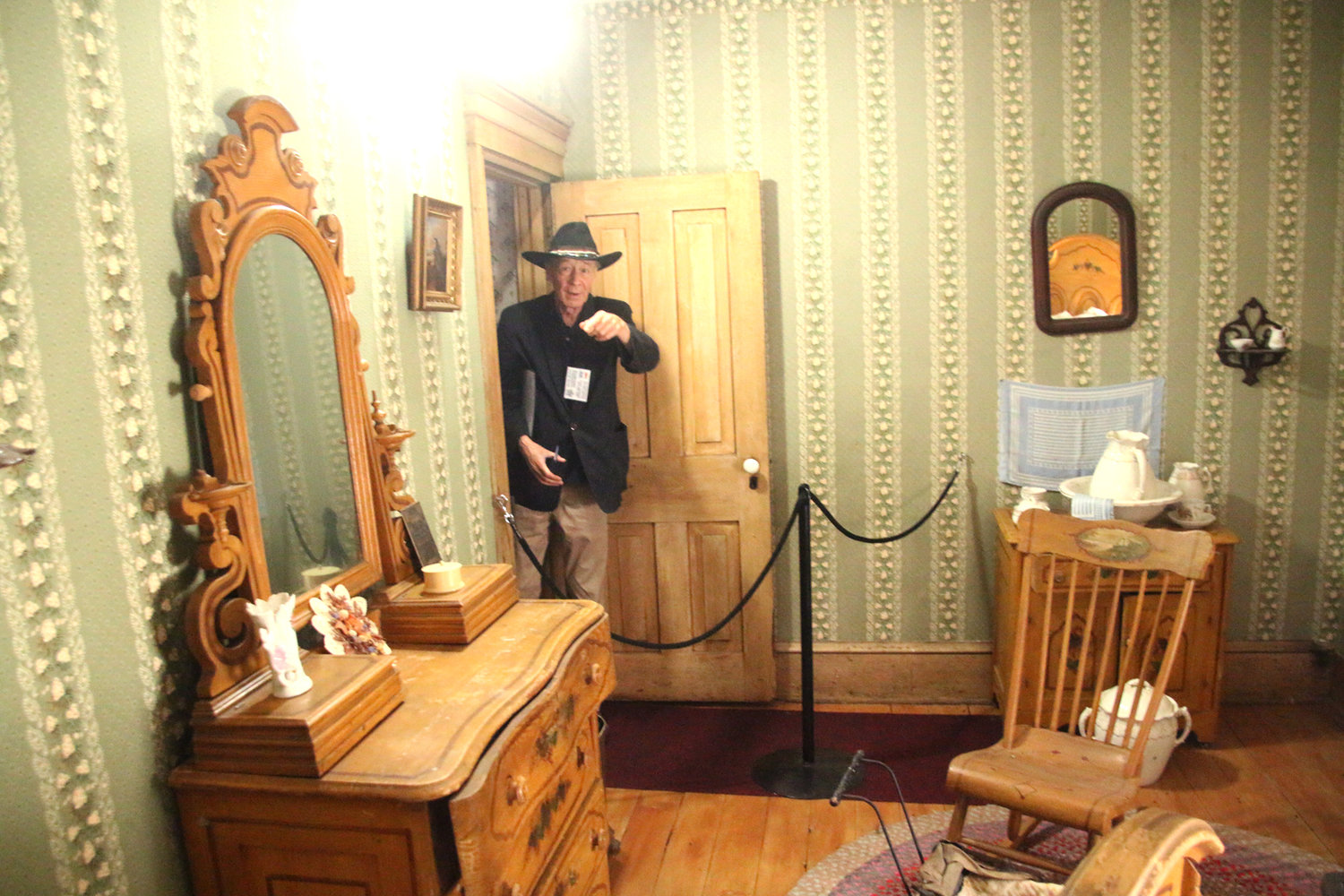 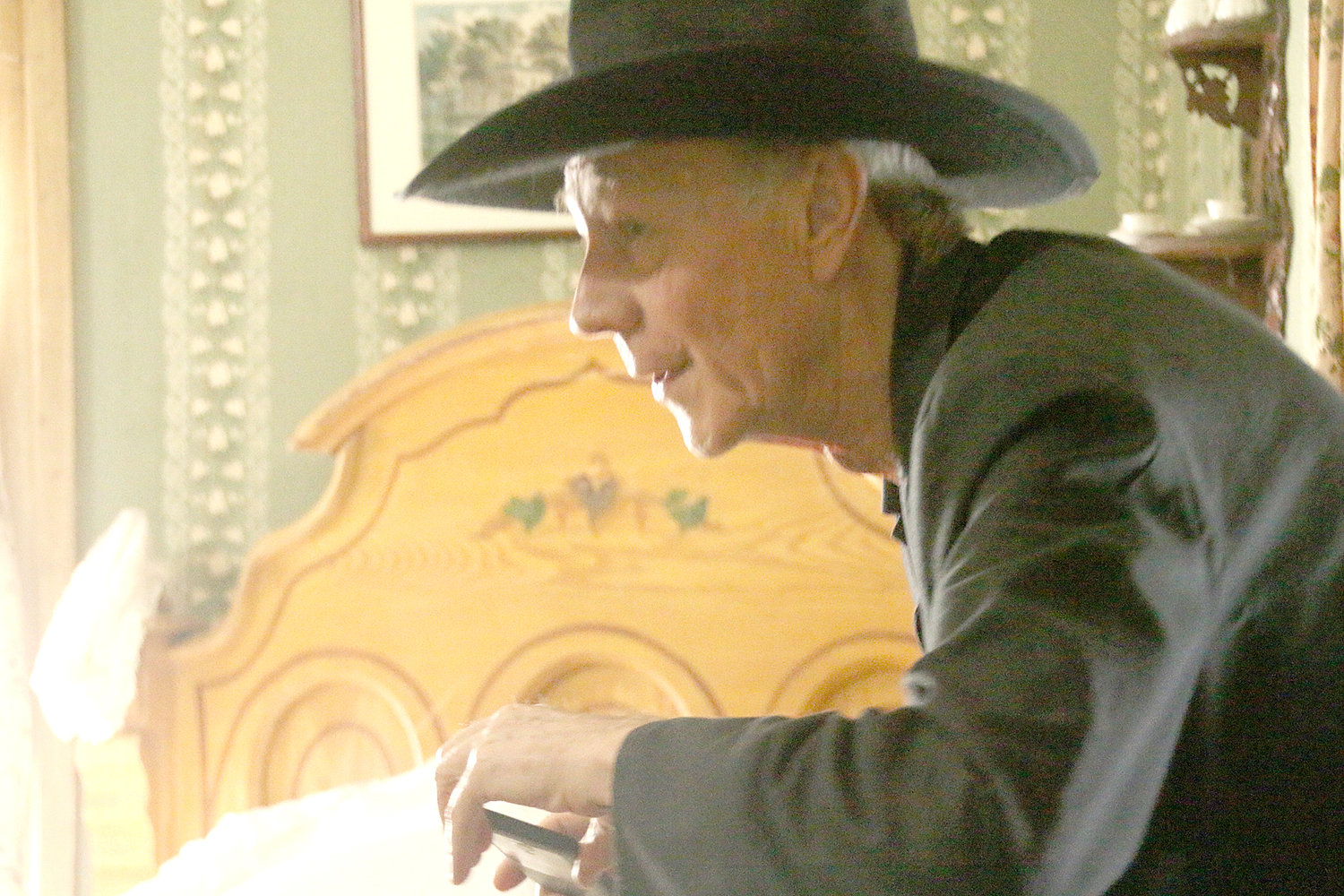 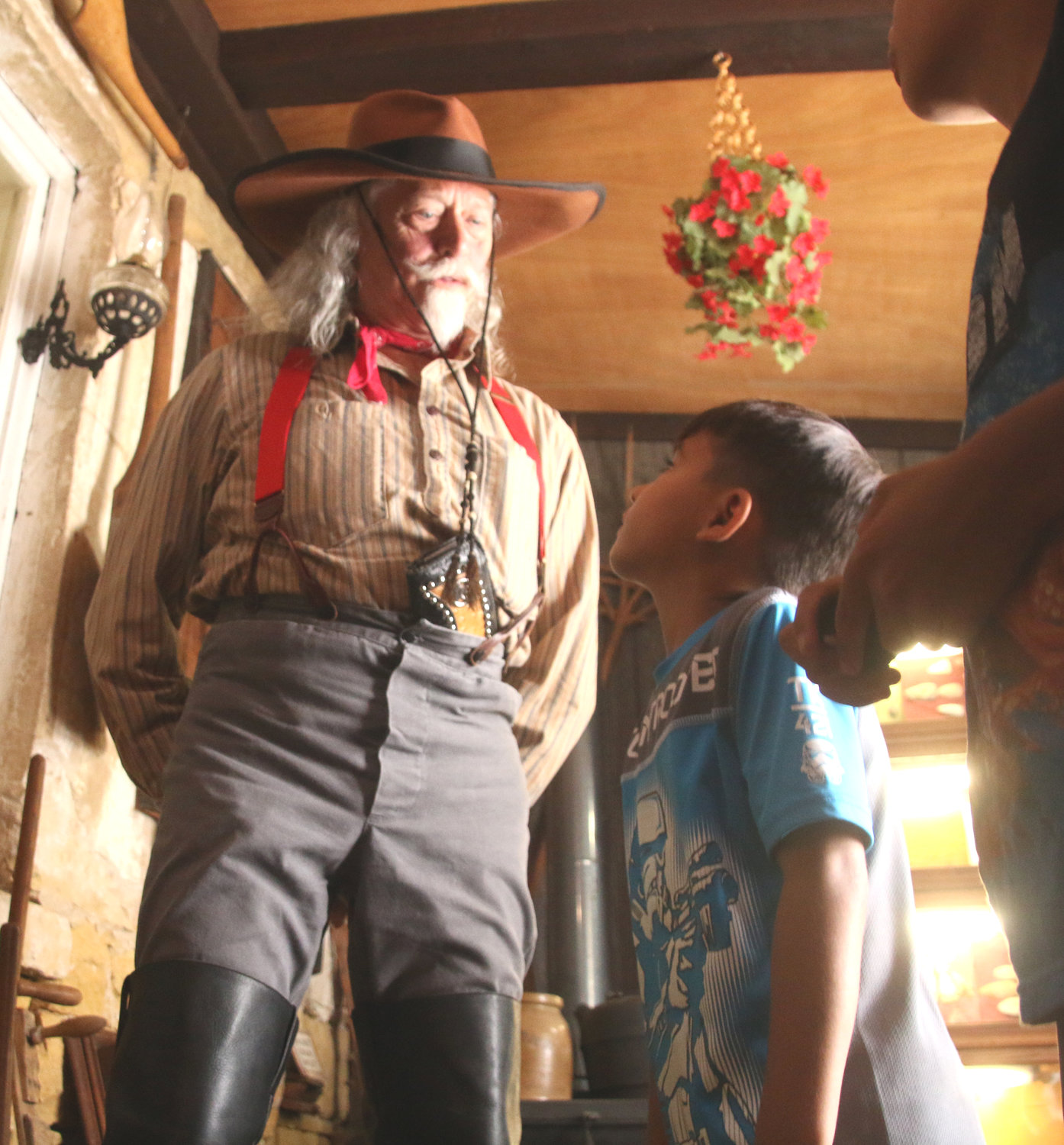 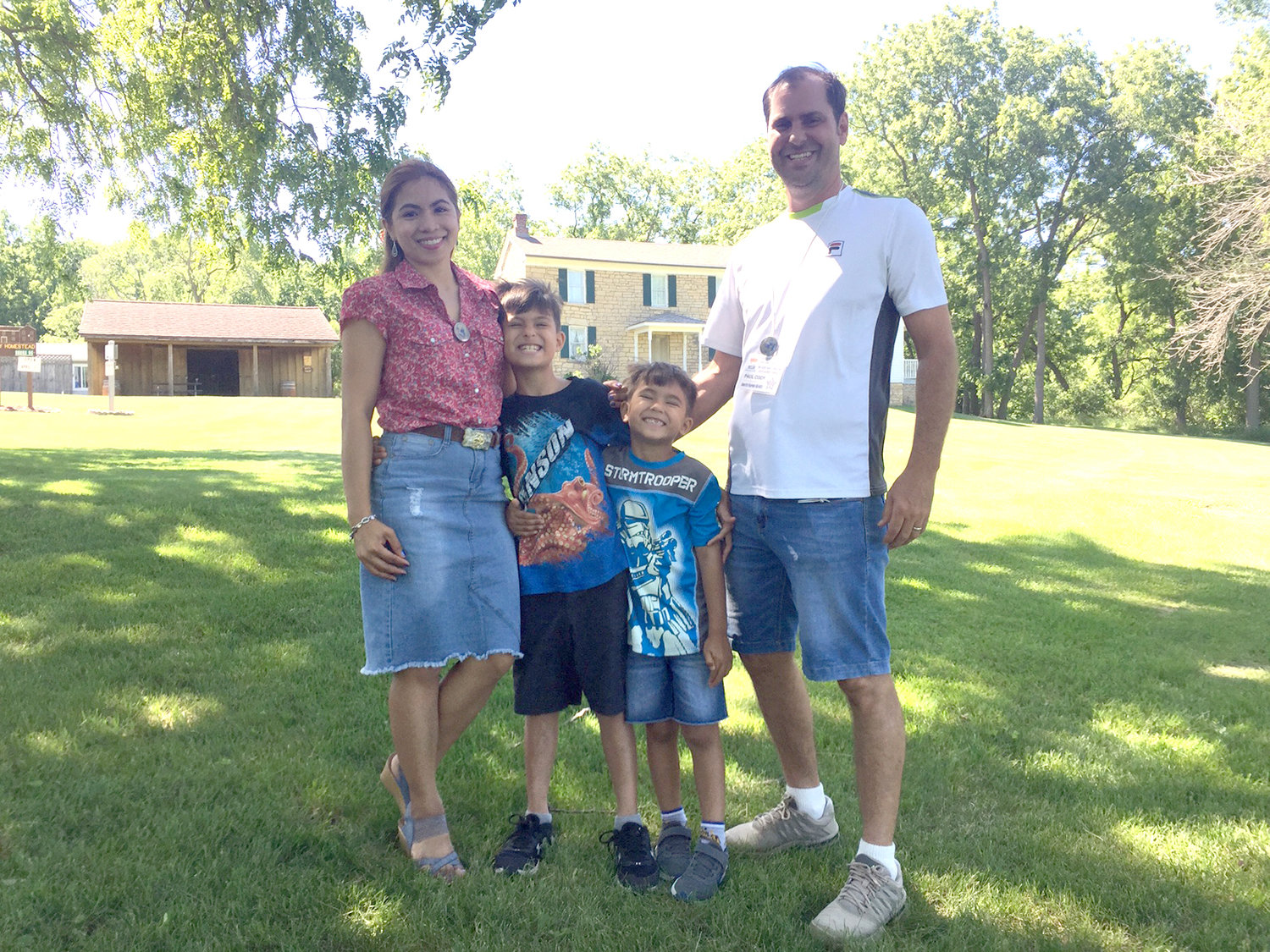 From left: Winnie, Corbin, Calen and Paul Cody, of the Philppines, were among 38 Cody descendants touring Scott County.
Mark Ridolfi 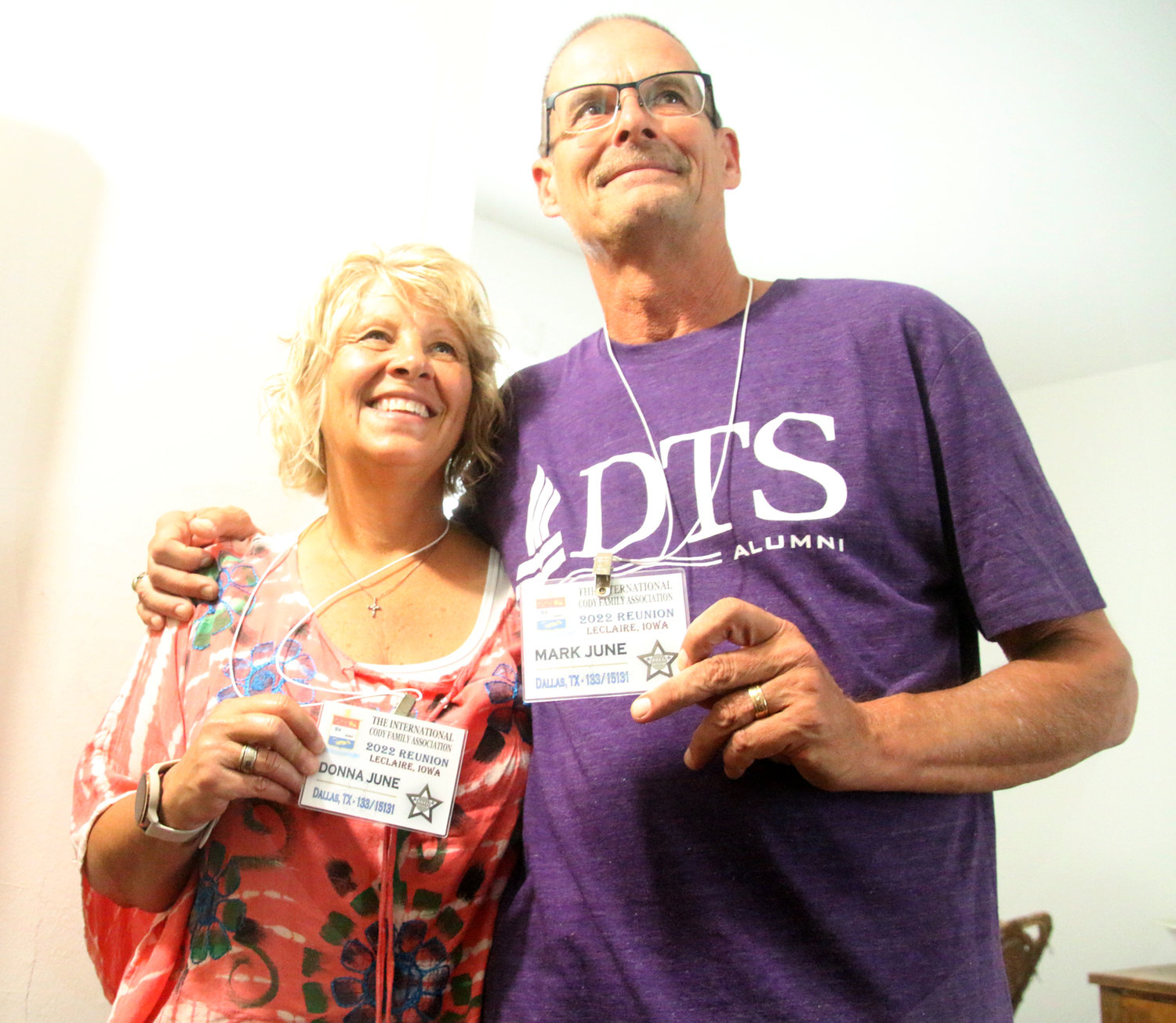 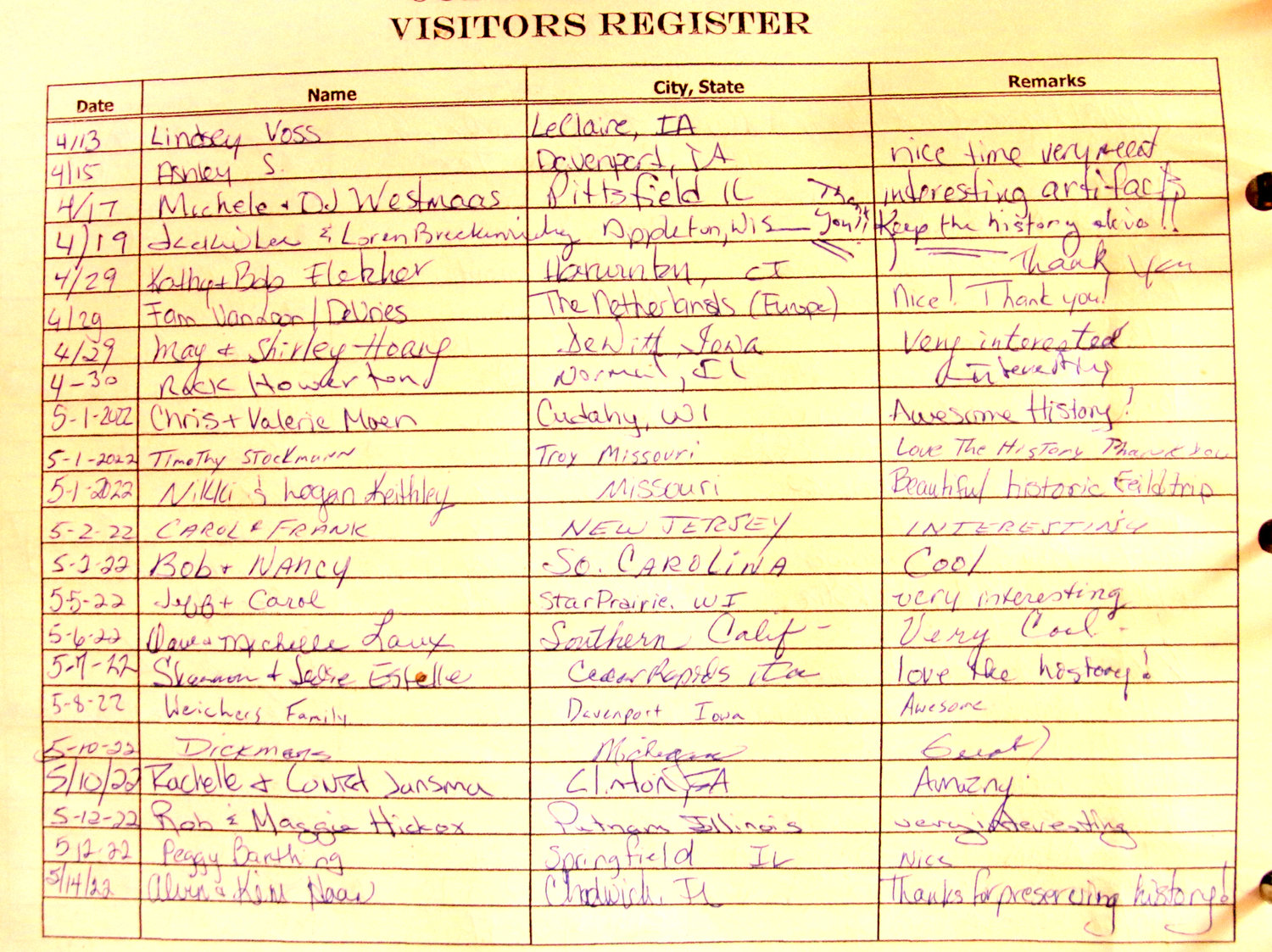 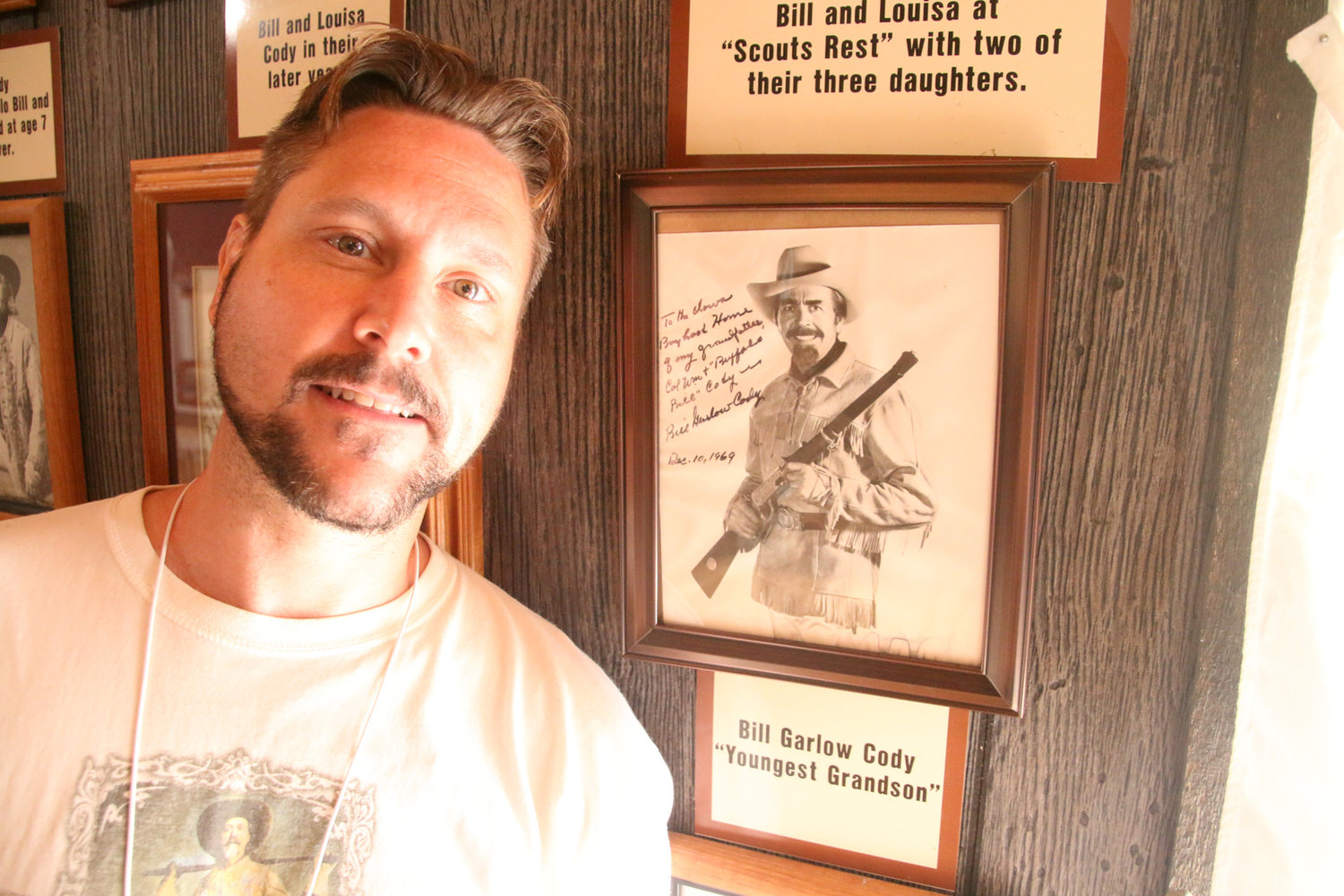 William “Kevin” Cody poses in front of a photo of his grandfather who was born as William Cody Garlow, but legally changed his name to emphasize the Buffalo Bill connection. William Garlow Cody frequently spoke about the family, and teamed with Daisy in 1968 to market a Commemorative Buffalo Bill Carbine BB gun called the “Scout.”
Mark Ridolfi 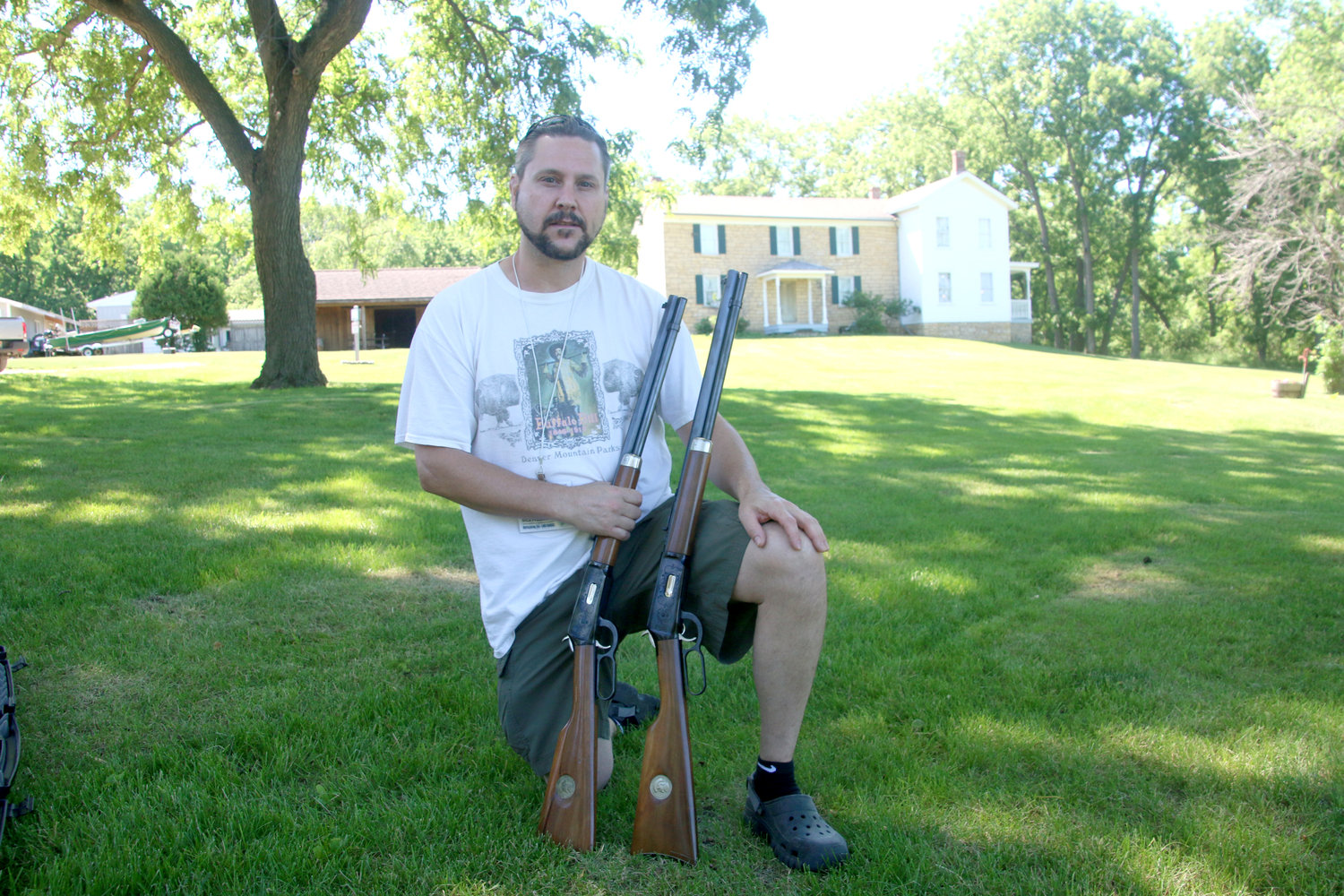 William “Kevin” Cody poses at the Cody Homestead with some Winchester Commemorative Buffalo Bill 30/30 Model 94 rifles after firing them earlier that morning at the Princeton shooting range.
Mark Ridolfi 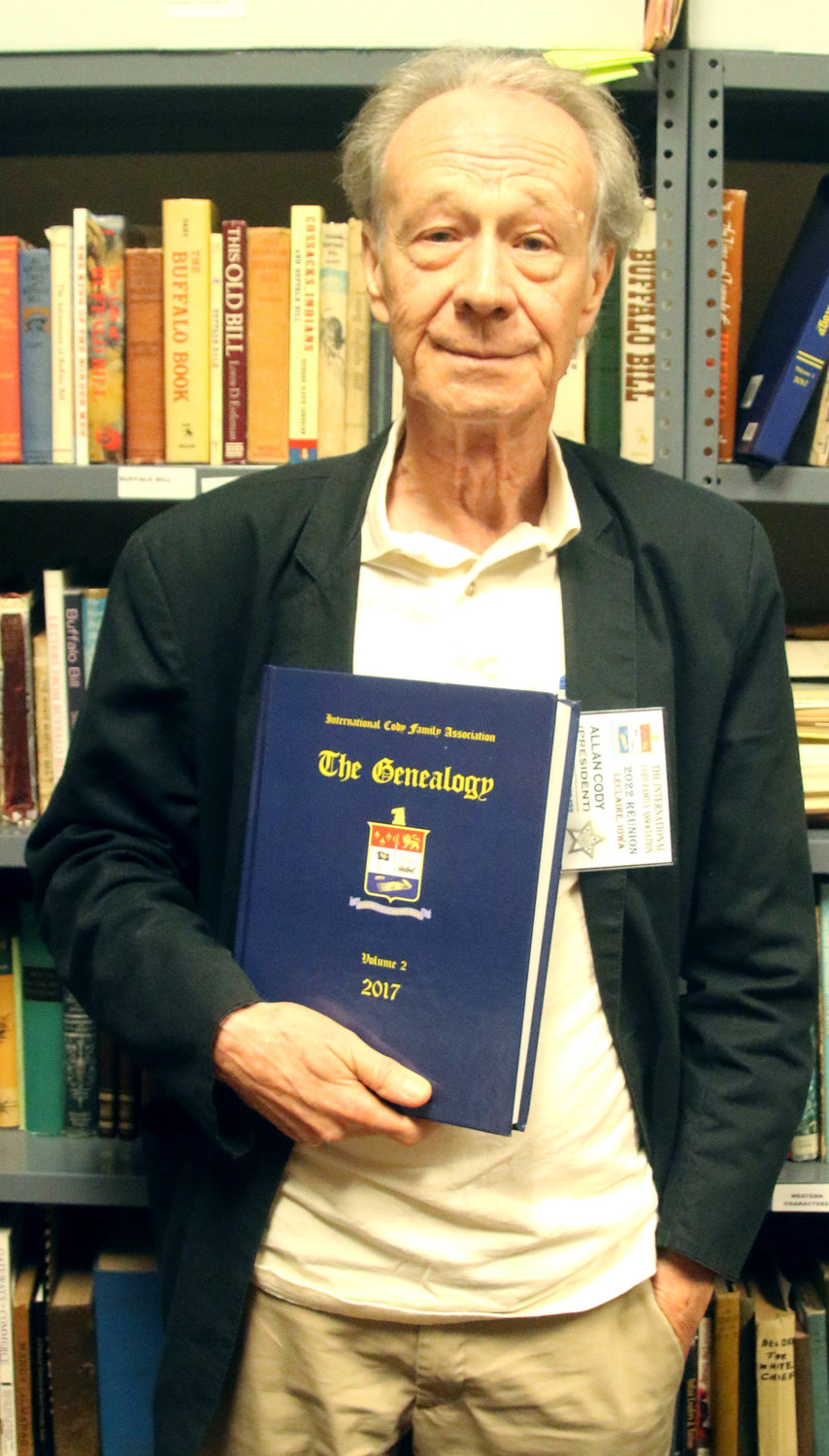 Updated June 30 to correct family names and some dates.

William "Kevin" Garlow Cody raced through his great-great-grandfather’s museum in LeClaire like a grown-up kid in a family lore candy store.

100-year-old tickets from Buffalo Bill’s Wild West and Congress of Rough Riders of the World.

50-year-old Daisy BB guns sold with a Buffalo Bill emblem on the stock.

Knives, buttons, badges and posters adorned with the iconic image of the man called the world’s first global celebrity by Britannica Encyclopedia.

“He wasn’t just one thing,” Kevin Cody said. “Think of all of his many known titles: Frontiersman. Showman. Pioneer. Trailblazer. Entrepreneur.  To those of us who have more of a personal connection with him, he is also known as a family man with a big heart.

“He knew he wronged the Indians. He spent his whole life making up for it,” Kevin said.

The Codys have held reunions in Tucson, Ariz., Vancouver, British Columbia, and Calgary, Alberta. The group went to the gravesite and museum in Golden, Colo. Four times, they’ve visited Cody, Wyo., home of Buffalo Bill Center of the West.

This was the first visit to LeClaire. None of the family members had ever visited Iowa.

Buffalo Bill spent 45 years in a show celebrating about a dozen years as a western explorer, government buffalo hunter and army scout, mostly for the U.S. Fifth Cavalry’s mission to move Indians from land west of the Mississippi River.

His Iowa history is short. It began with his Feb. 26, 1846, birth, and ended seven years later when his family moved to Kansas.

Bill’s father, Isaac, had followed brother Philip and family to Scott County. Philip Cody’s wife was related to Andrew Logan, who had launched a Davenport newspaper. The Cody family settled in a Scott County cabin for a time. That LeClaire riverfront shack was dismantled and moved to Cody, Wyo., in 1933, where it remains on display.

Isaac Cody was hired to build a home and start a farm for the Breckenridges, the family of a wealthy landowner, who died before the home was complete.

That is the home maintained by Scott County taxpayers as the Buffalo Bill Cody Homestead, at 28050 230th Ave., complete with two resident buffalo.

One of them, Loco, ambled out of the shade long enough Saturday for the Codys to take photos during their June 18 tour of the homestead.

The homestead gift shop displays souvenirs beneath a massive mounted buffalo head. Five-year-old Calen Cody stared up at the mount and asked, “Where’s the rest of it?”

Kevin had never seen that photo of his grandfather.

Kevin has his own hat and skins and has dressed up in his western apparel to participate in countless Buffalo Bill events in his native town of Cody, Wyo., where the name still evokes reverence.

It’s a name that Allan Cody couldn’t escape as a kid. Allan, 71, is president of the family association, and continues to meticulously document family history that began long before Buffalo Bill was born.

Luther and Aldus M. Cody compiled that history in “The Cody Family Directory,” published in 1925.

More Codys updated and added their own directories. In 1954, Lydia Cody wrote, “The Cody Family in America 1698: Descendants of Philip and Martha, Massachusetts, Biographical and Genealogical.” The book documents a rich Cody history from Europe to America.

Allan Cody’s own research is in a two-volume edition he donated to the LeClaire museum. The books list names and dates, and assigns numbers to differentiate among the same-named Codys of different generations.

The numbers help guide family members and researchers through generations that may not have been as well-known, but have stories worth telling.

“I understand Buffalo Bill not as a pioneer, but as a result,” Allan Cody said. “More economic opportunity is what motivated these people.”

Buffalo Bill was the result of a family that shrugged off calamity and looked for new ventures.

Buffalo Bill’s grandfather, Philip, left New York state with his brother, Joseph, in 1798 for Canada, which was recruiting American settlers. But within a few years, a growing Quaker colony made Philip uncomfortable.

Philip brought 10 of his 11 children to Ohio, then son Isaac followed his brother Philip to visit Iowa.

Buffalo Bill, called “Will,” as a kid, roamed Scott County hillsides, fished and swam in the Mississippi River. His older brother, Samuel, died in a fall from a horse and is buried in Long Grove Christian Church cemetery.

Buffalo Bill’s father, Isaac, completed the Breckenridge homestead. In 1853, he heeded invitations from brother Elijah, beckoning him to Weston, Mo.

His sister, Helen Cody Wetmore, begins her 1918 memoir with the trip to Kansas.

“To Will, this western trip thrilled with possible Indian skirmishes and other stirring adventures, though of the real dangers that lay in our path, he did not dream.”

Isaac's brother, Elijah, was a successful trader in Weston, Mo., and had slaves. The Kansas-Missouri region raged with terror attacks from William Quantrill’s Raiders, and anti-slavery militias.

“We discount the idea that Isaac went to Kansas as a political activist,” Allan Cody said. “After all, Isaac went to visit brother Elijah, who was a slave owner.”

Helen Cody Wetmore wrote that Isaac tried to avoid the strife. “He had stood prominent in political circles in Iowa, and had filled positions of public trust; but he had no wish to become involved in the partisan strife that raged in Kansas,” she wrote.

According to the Wetmore memoir, Isaac, “skillfully contrived to escape declaring for one side or the other, but on the scroll of his destiny, it was written that he should be one of the first victims offered on the sacrificial altar of the struggle for human liberty.”

Allan Cody put it more directly: “Isaac was suckered into giving a free soil speech in a pro-slavery crowd.”

The memoir quotes Isaac’s speech: “I have no wish to quarrel with you. But you have forced me to speak, and I can do no less than declare my real convictions. I am and always have been, opposed to slavery. It is an institution that not only degrades the slave, but brutalizes the slaveholder…”

As the speech ended, Isaac Cody was surrounded and stabbed in the back.

Young Will saw the whole thing. “You have killed my father! When I’m a man, I’ll kill you for it,” his sister’s memoir recounts.

Those experiences by age 9 ended the idyllic youth that began in Iowa.

“His memories are those of a traumatized youth. Civil war, civil strife, Bloody Bill Anderson, the massacre at Lawrence,” Allan Cody said.

Will’s father survived the attack for but a year, leaving Will with his uncle in Missouri. Will would ride would ride with the anti-slavery militias seeking vengeance for his father’s death.

By the time he was a teenager, Will was an Army scout, launching a dozen years of exploits he would recreate in the Wild West show for 45 years, until his death, on tour, in 1917.

Those shows traveled worldwide and cultivated a Wild West reputation that still draws visitors to the Cody Homestead in Scott County.

“We get a lot of Germans,” curator Marilyn McCool said. This year’s guest book included visitors from The Netherlands.

Codys caravanned from their LeClaire hotel to the homestead, then visited Samuel’s grave in Long Grove, and other regional sites during their four-day stay.

This reunion, like the previous, will be documented in the Cody Review, an annual  publication that through the years includes family birthdays, graduations and other milestones.

The latest review includes a gallery of Minecraft pages that link to YouTube videos of Buffalo Bill-themed scenes: the Wild West show tent, his Irma Hotel in Cody, and others, but none, yet, of the Iowa homestead.