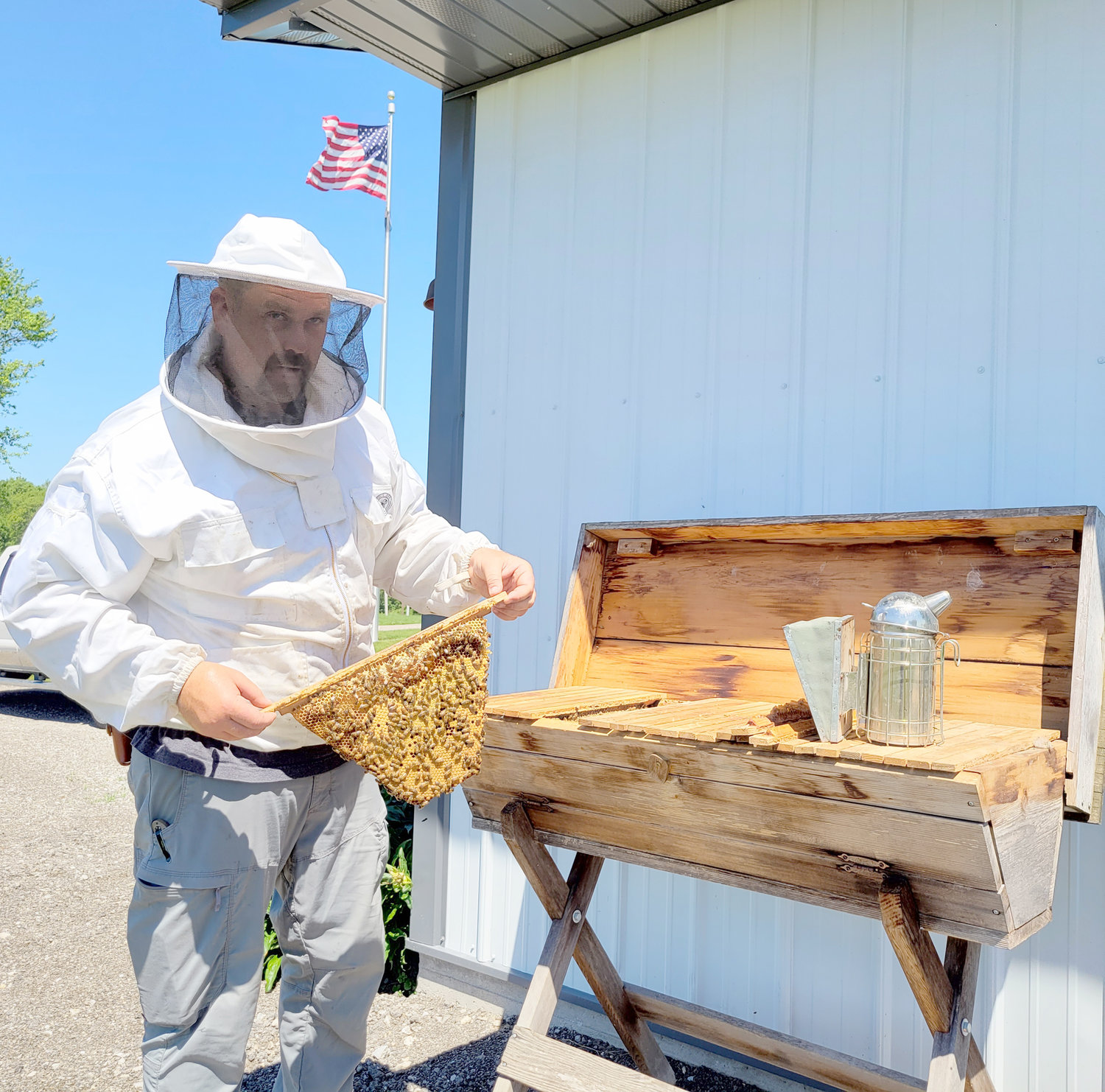 Brad Jipp of Moscow displays a frame from one of his 16 beehives.
Kimberly Sloan 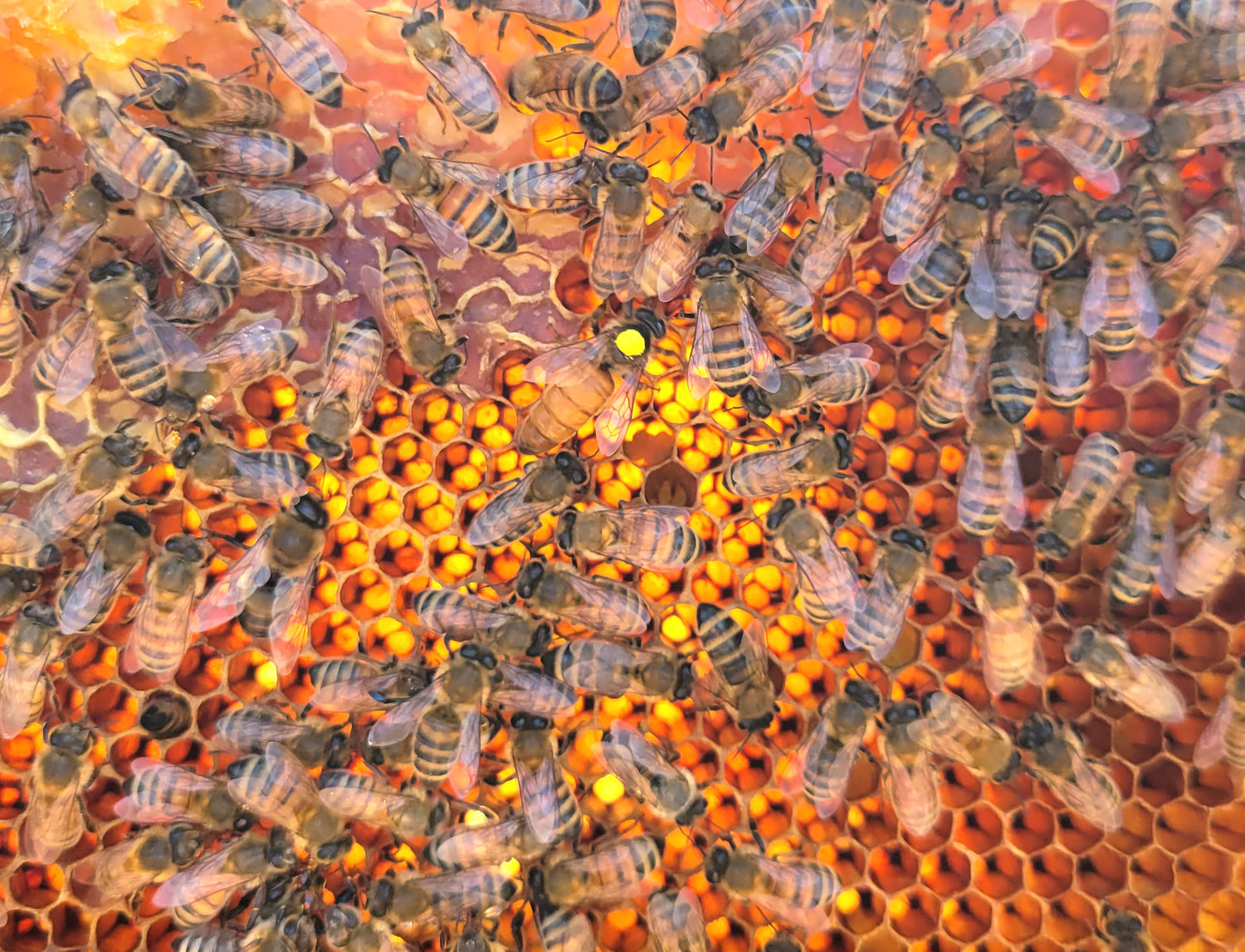 A queen in Brad Jipp's hive is the one with the yellow dot on her back.
Kimberly Sloan

Rob Jipp of rural Wilton lifts a frame from one of his 25 beehives.
Kimberly Sloan 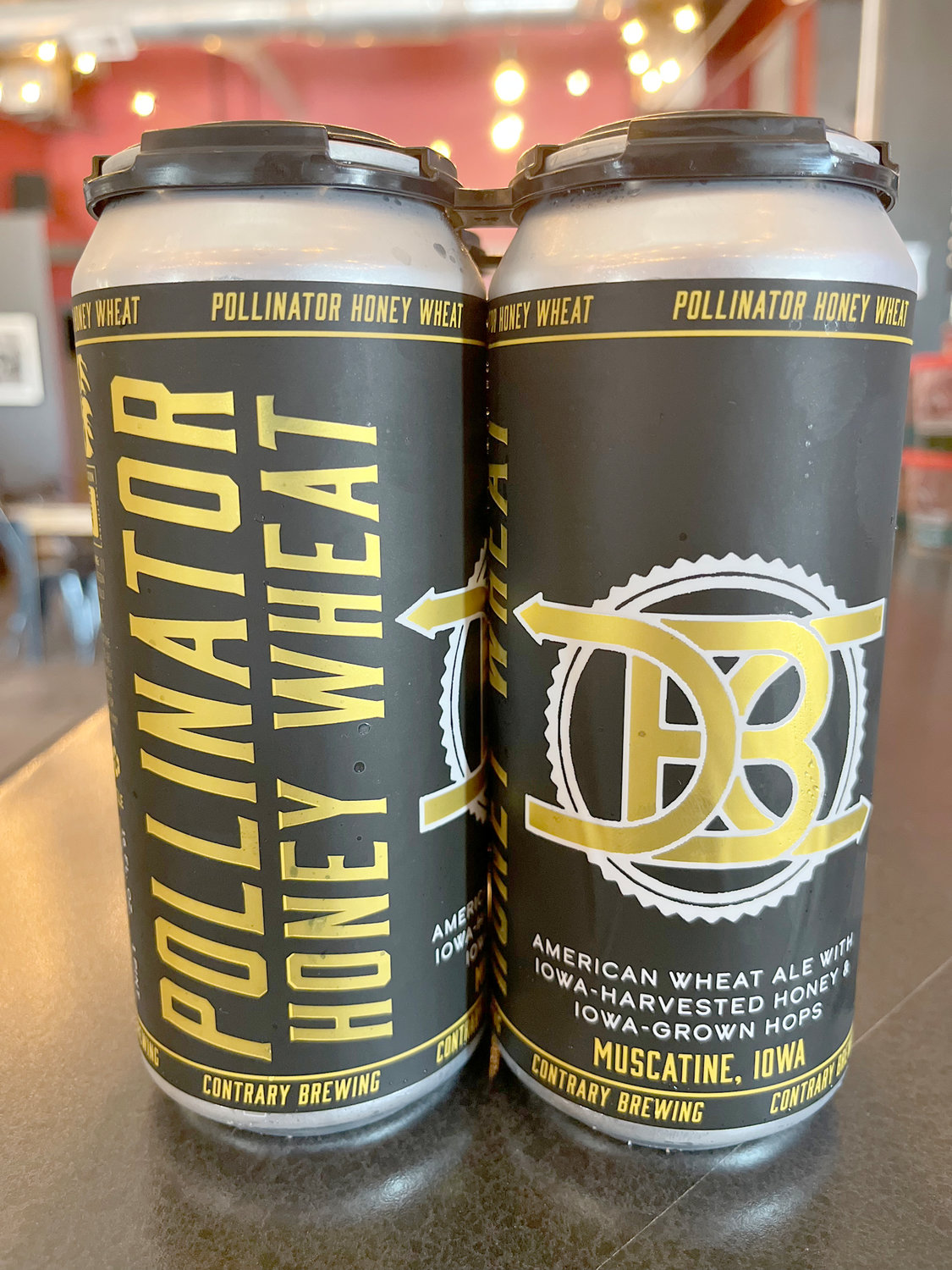 The Pollinator, a honey wheat beer sweetened with Rob Jipp’s honey. Contrary Brewing Is a small, locally owned business, located in downtown Muscatine. It is owned by Robin and Mark Mitchell.
Contributed photo 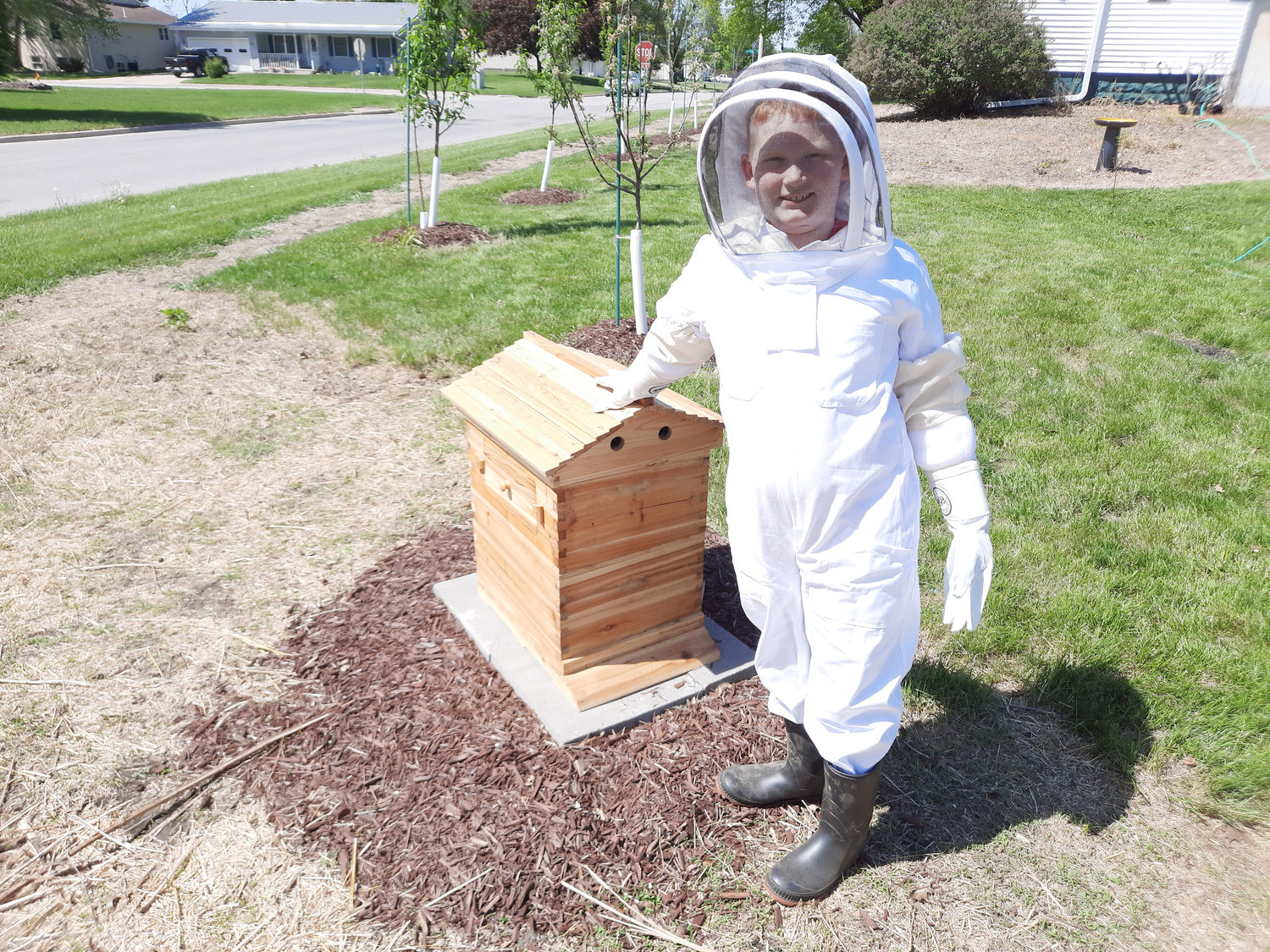 Nine-year-old Alex Harkness with his beehive. Alex is the son of Grant and Katrina Harkness of Wilton.
Contributed photo 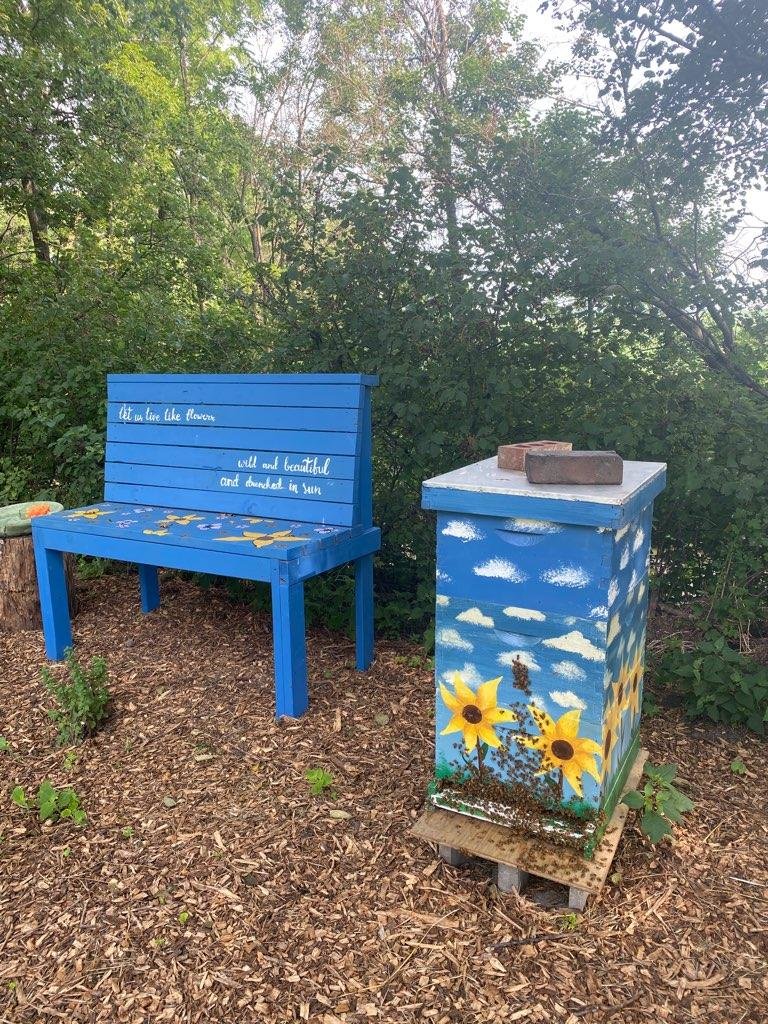 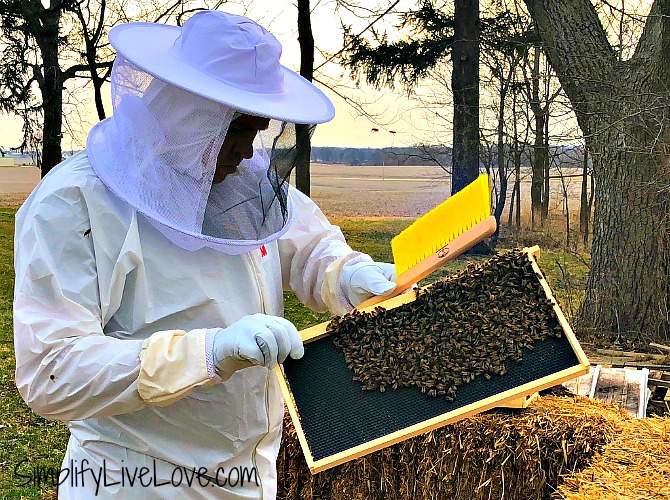 Dan Marine with bees from his family's hive.
Contributed photo
Previous Next
Posted Wednesday, June 29, 2022 10:16 am
Kimberly Sloan of the Advocate News

There are more than 4,500 beekeepers in the state of Iowa. As part of National Pollinator Week, which occurred June 20 through 26, four beekeepers with hives in rural Muscatine and Cedar counties shared what they love about their hobby.

Brad Jipp of Moscow is always on the go. In addition to co-owning Triple B construction in Wilton with his wife, Grace, he tends to 16 different beehives.

“Beekeeping is very relaxing and I enjoy it,” he said. “I also have a degree in environmental science, and I like to study conservation.”

Jipp started keeping bees six years ago, after he took a local course on the subject.

“I began with three pounds of honey bees and drones, and one queen,” he said.

Honey bees are divided into three classes. Worker bees, which are always female, travel outside the hive to collect pollen and nectar from plants. They also construct honeycombs and care for larvae.

Drones are male. They breed with the queen, which is the only bee in a hive that is capable of reproducing. One queen can lay more than 3,000 eggs per day, depending on the time of year.

“Hives have personalities based on the genetics of the queen,” Jipp said. “Most of mine are calm, but I’ve had some that can get a little ornery.”

Colonies are housed in wood cases that contain a system of frames. As the hive grows, more frames or boxes are added on.

“You have to ensure there’s enough room in the hives for the bees to work,” said Jipp. “If it becomes too crowded, they’ll split into two groups and half will swarm off somewhere else to start a new hive.”

Jipp said it takes a couple of hours each week to check on all of his bees. To access the hives safely, he dons a hat with a veil and uses a handheld smoker to blow smoke into the hives before opening them.

“Smoke is used to calm bees down. It doesn’t hurt them,” he said.

Jipp spends more time working with his bees during the spring, when he’s setting up for the season, and the fall, when he’s preparing to cover his hives for winter.

“Right now, the bees are busy because it’s the honey flow,” he said, referring to a period of time that occurs in late spring and early summer. Flowers are in bloom, and bees are focused on gathering as much pollen and nectar as possible.

“They’ll fly up to three miles to forage,” he said.

Bees produce honey when they store nectar away for winter consumption. Harvesting it does not hurt the insects’ chances for survival, as they produce two to three times more honey than they will ever use.

Last year, Jipp and his wife extracted 40 to 60 gallons of honey.

“We mostly give it away as gifts to family, friends, and employees,” he said. Extra product is sold at the Triple B office.

Brad and Grace Jipp have three school age children: Ella, Henry, and Bo. “They’re starting to express some interest in this hobby as well,” he said.

Coincidentally, Brad Jipp’s second cousin, Rob Jipp, took the exact same bee class as him, only on a different night of the week. Both Jipps were unaware the other was taking the class, until they completed it at the same time.

“I’d wanted to raise bees since I was a kid,” Robb Jipp said. “I finally was able to get around to doing it about six years ago.”

Rob Jipp has 25 hives spread across three locations, including his home north of Wilton.

Jipp also sets high goals for his ability to overwinter his bees.

“This year, I was able to keep about 75 percent of them alive,” he said.

Back in April, he took one of his hives to help pollinate an apple orchard in Muscatine County.

“It’s not so much about the money, as it is enjoying the process,” he said.

Like his cousin, Rob Jipp considers beekeeping to be relaxing.

“I like walking around and checking on my bees. During the nectar flow, there’s always a buzz in the air because they have a mission and they’re not worried about you,” he said.

Jipp works at REC in Wilton as a mechanic. He and his wife, Annie, have three adult children: Morgan, Rachael, and Luke. He called harvesting honey a “family operation.”

“The first year, the kids came home and saw the bees and said, ‘So, we’re bee farmers now, huh?’” he said.

‘My fear was uninformed’

Alex Harkness, the 9-year-old son of Grant and Katrina Harkness of Wilton, is obsessed with bees.

“He loves them,” his father said. “He has bee books, bee stuffed animals… he’ll even follow bumble bees around in our yard and talk to them. He names them all Bee-Wee.”

This spring, the Harknesses decided to give beekeeping a try.

“It was my wife’s idea,” Grant Harkness said. “I’m deathly allergic to them.”

The family – which includes son Ben, age 12 – started off small with a single beehive.

“After a few months, I came to realize that my fear was uninformed,” Grant Harkness said. “Bees are overwhelmingly uninterested in humans. They are task-oriented.”

Harkness sees beekeeping as a means to have a positive impact on the local ecosystem.

He also sees his change of heart with bees as a powerful moment of self-reflection.

“You have this fear of something that goes all the way back to your childhood, but now you’re an adult and you have a chance to face that fear,” he said.

“Wasps are a different species with a different mentality. They react far differently to disturbances. It’s unfortunate that bees are lumped with them into this pariah group of things that hurt.”

Michelle and Dan Marine of rural Wilton are relatively new to beekeeping as well. Michelle Marine is the author of “How to Raise Chickens For Meat,” and a digital content creator. Her blog, Simplify Live Love, focuses on sustainable living.

Marine has written a number of blog posts about her family’s recent foray into beekeeping. One of her posts, How to Start Beekeeping, breaks down supplies and basic information beginners should know as they start their own adventure.

“As I was busy learning about how to start beekeeping, one thing I was most concerned with was beehive kits and a list of beginning beekeeping supplies. I knew I’d need a hive and bees, but the other things? That I really didn’t know,” Marine said.

Marine said beekeepers of all levels can register with the state of Iowa to qualify for specific protections from exposure to chemicals from crop spraying that could harm bees or contaminate honey. Per state code, pesticide applicators must not spray near apiaries – the technical term for a beehive.

Marine also has advice for families that aren’t ready to step into the beekeeping world but want to help wild pollinators succeed.

“Growing a pollinator garden encourages and supports the drastically declining wild and domestic populations of pollinators,” she said. “Attracting bees, butterflies and birds is a fun and important project.”

Michelle and Dan Marine have four children: Anna, Ben, Sara, and Cora. All of her family-friendly material is available to read at simplifylivelove.com/beginning-beekeeping-supplies/.