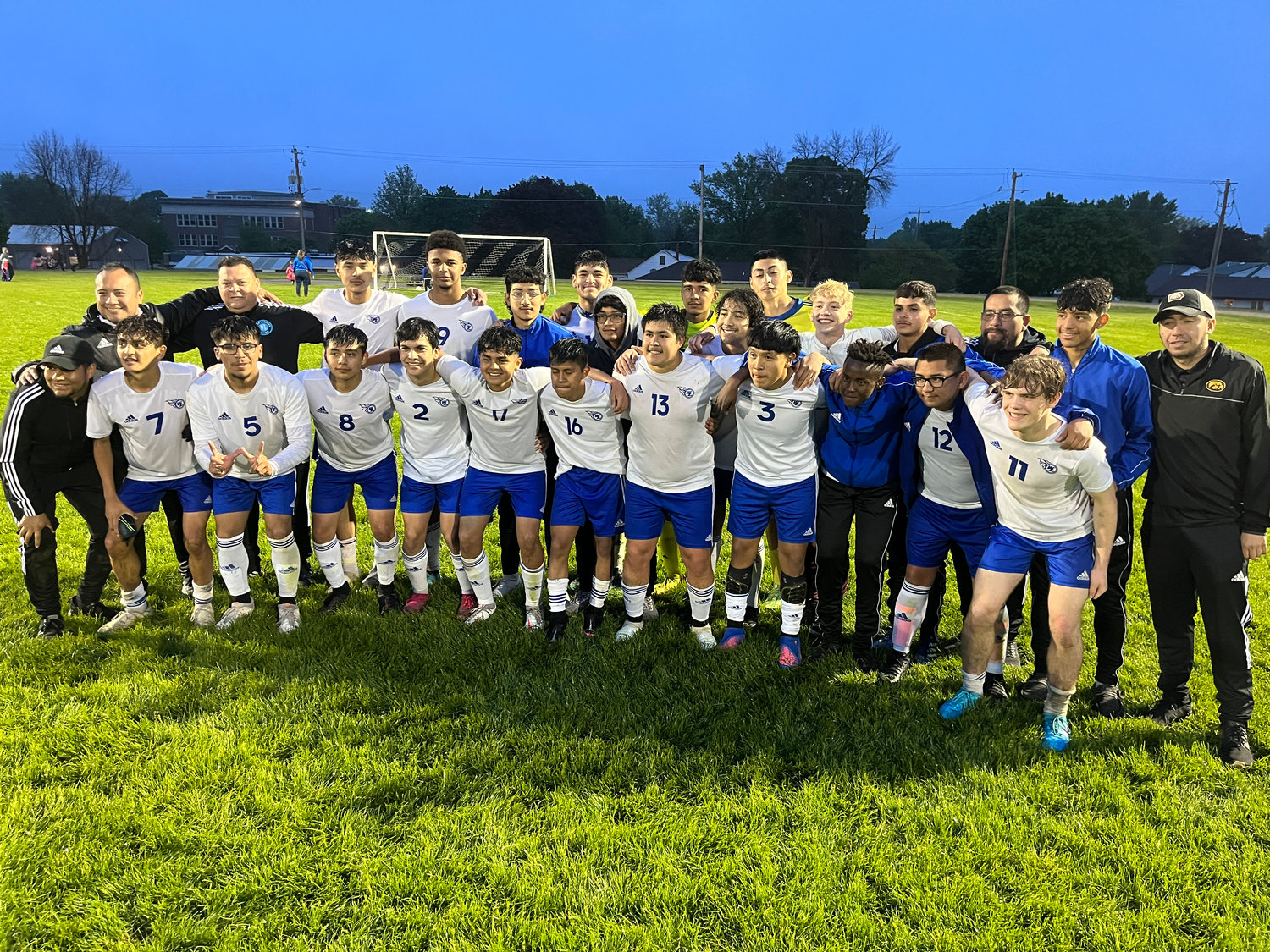 After a defensive first half, the gates opened up offensively in the sub-state championship game at Gladbrook Reinbeck High School in Reinbeck Wednesday night, May 25, West Liberty battling to a tense 4-3 win after taking a 1-0 lead by the half.

The Comets celebrated their third straight return to the eight-team state tournament where they finished in the top four a year ago with a goal to get into at least the state championship game this season.

West Liberty built a two-point lead twice as a talented hosting Rebels team, which finished their season at 15-2, kept fighting back, and never gave up including getting a goal off a Comet player to get within one late in the game only to be held off by West Liberty goal keeper Ruben Meraz and other defenders.

Jon Dinsdale, who said he had coached his last high school game after 10 years with the Rebels including two state title runs in 2015 and 2016, expressed a lot of pride in his team’s accomplishments – only hoping to get them at least one step closer in making it to the state tournament after a 4-9 season a year ago.

“I just wish there would have been more time on the clock,” Dinsdale said.

The coach went on to compliment the Comets, noting they are a very talented team and he said it would take a colossal effort to beat a team as great as West Liberty, even though his Rebels were top ranked in the division. “It’s okay to lose to great teams,” he said.

The coach called the season an “unbelievable ride” and said his team came out strong in the second half and controlled the momentum, getting on the board after West Liberty had taken a 1-0 lead on a top of the box goal by senior Jahsiah Galvan off an assist junior Juan Batista at just 2.5 minutes into the contest. “Unfortunately, the ride ended tonight,” Dinsdale said.

The Comets had their chances, as did the hosts, who came back just seconds later and thought they had tied the game on a Tyler Nolder kick, but the senior was offside’s and the goal was denied.

A number of penalty kicks by the Rebels were high or off target as the Comets withstood the attack on a foggy, drizzly night to secure a 1-0 halftime lead, West Liberty controlling the ball most of the first half except for a few instances when the Rebels rallied down the field.

Dinsdale said that opening goal was vital to the outcome of the game, having been in championship finals before.

In the second half, the hosts came out firing, getting the ball in front of the West Liberty defended net a number of times before finally Nolder, who finished the season with 22 goals, connected on a penalty kick with 34:01 to play, knotting the score at 1-1 and giving the Rebels momentum.

Just over four minutes later, though, at 29:45, Galvan got his second goal of the day with a penalty kick to restore the lead for the Comets and the teams battled for control through the middle of the period before senior Josh Zeman outraced two defenders to a bouncing ball and finished by putting it into the net to give West Liberty a 3-1 advantage at 15:12. The senior raced toward the Comet bench, sliding onto the wet grass in celebration along with other teammates. The bench got a warning from officials for the celebration that finished off the field, Comet teammates piling on with the cushion goal.

But the Rebels didn’t stop fighting, coming back at 10:29 when Ethan Geinger connected to cut the margin to 3-2.

The Comets weren’t done scoring either, however, as junior Juan Mateo got ahead of defenders, slipping one past the goalie, and put through a fourth goal to make it 4-2 with 7:31 remaining, the sliding celebration kept on the field this time.

Still, Gladbrook Reinhart stayed alive with hope, getting a third goal off a penalty kick by senior Drake Blakesley, attempting to get over the heads of West Liberty defenders when Galvan hit the ball with his head in an attempt to ricochet the shot. Instead, it bounded over the hands of Meraz and into the net to cut the score to 4-3 at 5:03.

The remainder of the game the Comets played keep-away from the Rebels, who desperately tried to tie the game, but ran out of time as West Liberty gained their third straight trip to state.

West Liberty, which is ranked fourth in the tourney, will play #5 Nevada in their first round Class 1A game in the state tournament at James W. Crownie Soccer Park in Des Moines on Wednesday, June 1, beginning at 12:10 p.m. Should the Comets win, they will play Friday the winner of top-ranked Western Christian of Hull, a team they lost to last year in the semi-finals 2-1 or eighth ranked Burlington Notre-Dame.

The semi-finals take place Friday at noon on two different fields before the state championship game on Saturday at noon.

Nevada, which is 15-6 on the season, hasn’t given up a goal since a 6-1 win over Grinnell on May 12, scoring 10 against Grand View Christian, four against Clarke and three against Des Moines Christian since.

The Cubs lost to Green County 3-2 on May 10 and fell to Marshalltown2-1 on May 7, Elkhorn 6-5 on April 23, as well as April losses to Dallas Center-Grimes, ADM and Bondurant-Ferrar, along with an opening season loss to Gilbert, 2-0.

Junior Drew Robinson leads the Cubs with 35 goals this season, along with 14 assists while classmate Edgar Cabrera has 16 goals and leads the team in assists with 18.

Junior Owen Freeman is the Nevada goalkeeper, with 65 saves to his credit this season.

Back To School Night race Saturday