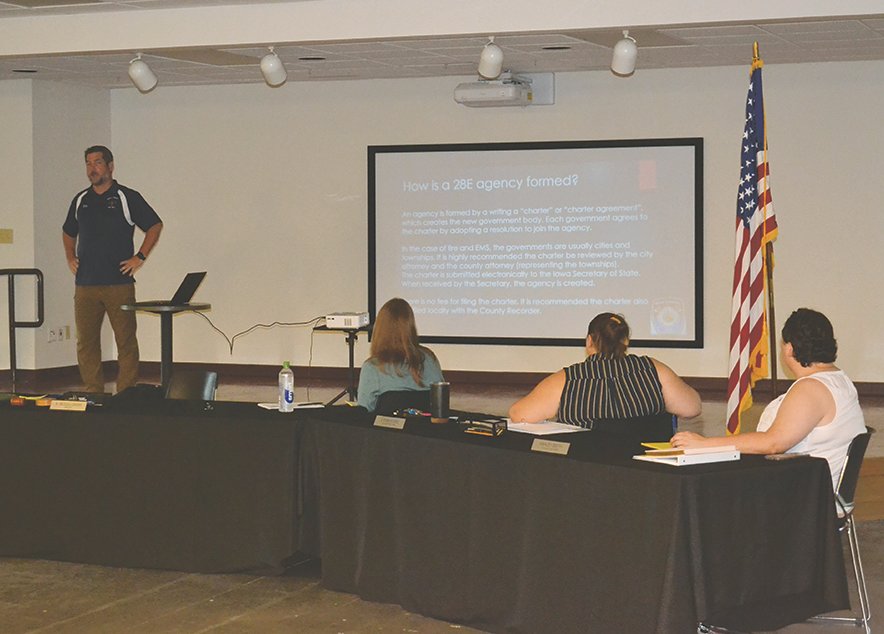 West Liberty Fire Department member Eric Christensen presents to West Liberty City Council about how a 28E agency would be structured in a work session before the regular city council meeting Tuesday, Sept. 20. Christensen is also on the city's task force and has been meeting regularly with rural fire department trustees and city officials about this.
Index photo by Xiomara Levsen
Posted Wednesday, September 28, 2022 9:07 am
By Xiiomara Levsen, Index Editor

The city council learned what a 28E would entail at a work session held before the regular city council meeting Tuesday, Sept. 20.

West Liberty Volunteer Fire Department member and task force committee member Eric Christensen presented to the city council about this. The week before he presented to the rural fire department board of trustees.

Christensen started off by answering whether or not the fire department could have a different name than the agency.

“Yes, it sure can,” Christensen said.

The next question Christensen posed was could an agency purchase worker’s compensation insurance?

“Yes, we’re going to have to,” Christensen answered. “And we are currently shopping to get prices and bids on what those insurance policies would be.”

The 28E agency would become a non-profit to hold social events and fundraising, he added. The agency would also be eligible for grants and money from the Federal Emergency Management Authority (FEMA). When the discussion about creating a 28E agency for the fire department began Christensen said he thought the answer is no.

Does the current owner of the equipment, trucks and fire station have to give the property to the 28E agency?

“Ultimately, this is a public policy decision made by those holding the titles of vehicles so it’s subject to negotiation by those establishing an agency,” Christensen said.

Transfer or holding are options, he said. More important is as part of the arrangement everyone forfeits something such as the power of money, control of property, as an agency provided by public service.

“So this quote and information was put together by George Oster (of) Oster Consulting,” Christensen said. “I know the city has reached out to him and he provided some feedback on what our original documents we provided to the city. This comes from him. He’s been in fire service for longer than I’ve been alive.”

One of the other items Oster put in the information Christensen had was legally the city or township owns the fire station or vehicles because they have the titles, he added.

“However, who really paid for it or owns the equipment at the station?” Christensen asked. “Is it not the citizens of the city and townships?”

The citizens ultimately bond the purchases and continue to own and benefit from the equipment and station regardless of legal ownership, he added. The uses of these items are for the protection of the citizens of the city and townships.

“And again, these are all considerations when forming the 28E agency,” Christensen added.

The 28E agency would have a board of directors. There would be two city council members, two fire and ambulance district rural trustees, two community members and two members of the fire department, Christensen said.

The board of directors would work directly with the elected officers of the agency and the daily operations of the association, which the volunteers would be in charge of, Christensen said. Finances would be provided to the city and rural fire department trustees and all tax filings would be reported to the state.

A yearly audit would also be done and be reported to the city as well, he said.

The agency would receive funding from property tax revenues split by the city, donations from community members and the tax revenue from the rural townships, Christensen said.

The cost to run the ambulance is about $220,000, he said. In the past few years, the ambulance department has broke even. Last year, there was a profit of around $12,000 so the fire and EMS are pretty self-sustaining.

“Also, last year administration in Iowa passed EMS as an essential service so what that means is it’s up to individual counties – they are able to tax now for EMS,” Christensen said.

EMS in Muscatine County isn’t considered an essential currently but Christensen hopes they consider making it one. West Liberty ambulance service covers part of Johnson and Cedar County, Christensen said he heard they were starting to have conversations about whether or not they’ll be funding the ambulance services.

Former Mayor Katie McCullough asked Christensen if having an agency would affect getting money from the counties. Christensen said he didn’t think so because they are an established transport service, where some of the communities aren’t.

Christensen listed several benefits of forming a 28E agency for city council including having open books with a yearly audit, fire safety education for the communities and rural townships, having equal representation on the board of directors, setting their own policies and having financial management with a yearly budget in place.

If the city agreed to move forward with forming a 28E agency, the task force would have four months to get the items Christensen presented on done, he said. He acknowledged that timeline might be a little aggressive but said with the city’s support they could.

Councilmember Dana Dominguez said she appreciated how time and work members from the fire department, city administration and rural trustee members have put into the task force.

McCullough asked Richard “Dick” Brand, a rural fire department trustee, what they thought of Christensen’s presentation when he presented the week before.

“Madam mayor, there were 14 of our rural trustees there,” Brand said. “Eric was on zoom but the committee met in person. Eric did the same presentation. We had good discussion. There were some good questions asked and answered. Some concerns were raised but in the end the vote was 14 – 0 to move ahead with it.”

Eason 1 of 1,567 finalists for prestigious scholarship

Board of Education elects officers

Eason 1 of 1,567 finalists for prestigious scholarship