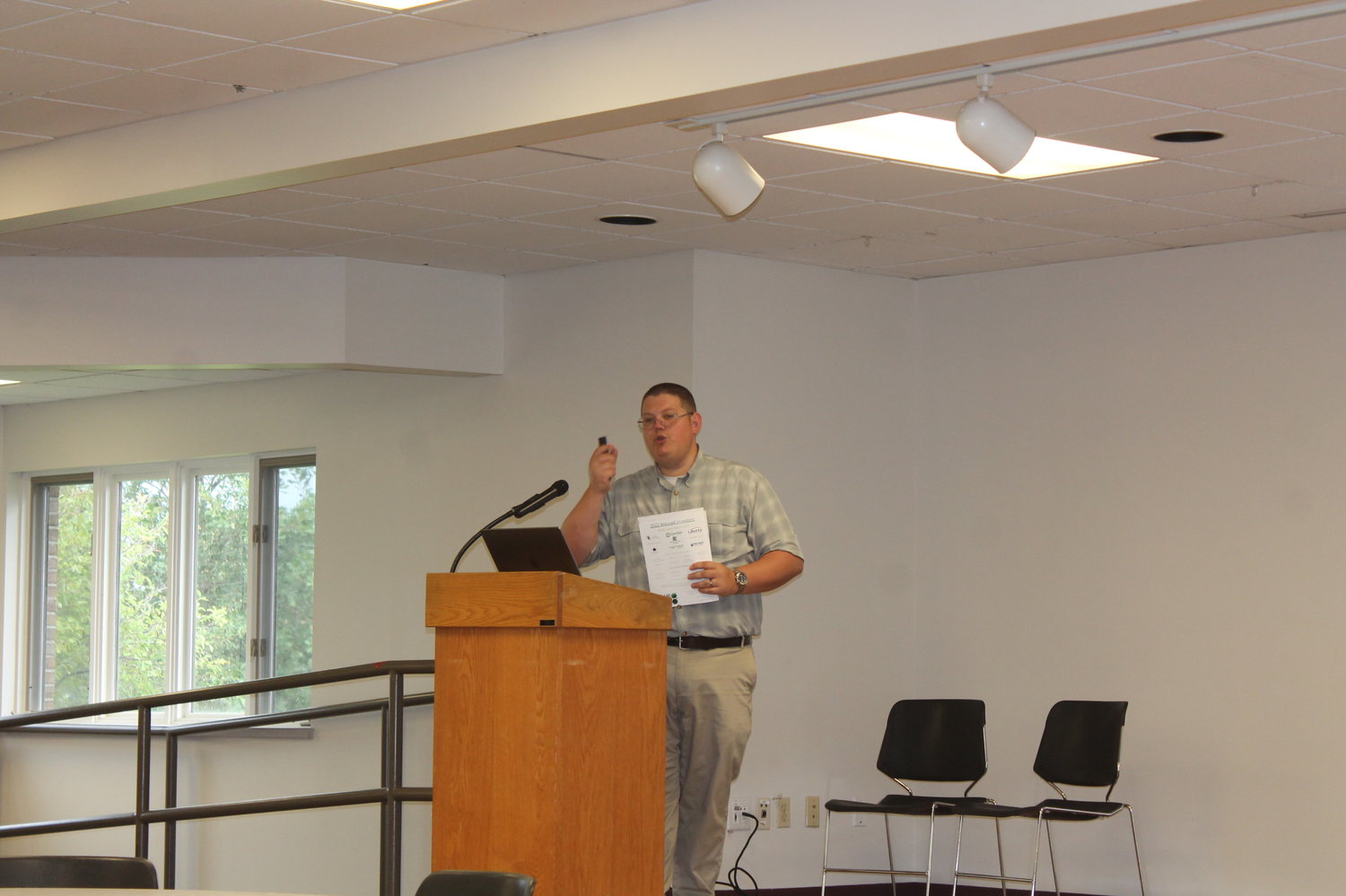 WeLead Executive Director Ken Brooks started the program by announcing a couple of grants they helped the community receive.

“WeLead is proud to announce a $200,000 grant that we received through the Iowa Economic Development Authority for this building here (317) on Spencer Street,” Brooks said.

At the last WLBA meeting, WeLead had applied but didn’t know if the grant application was approved yet, he added. Two local developers, Scott and Darren Brooke, will create two three-bedroom apartments upstairs with commercial space downstairs.

A $100,000 grant for 115 East Third Street has Edward Jones in front, Liberty Public House in back and two apartments upstairs, Brooks added.

“We are really excited to welcome El Jibarito Bakery,” he added.

They are located at 208 West Third Street, just outside of downtown and offer baked goods and strong coffee.

WeLead is also assisting the city with the Sister Cities program. This program is where you take a municipality or city or a county in the United States and create a partnership with another municipality in another country that have similarities to you to bring economic prosperity and educational benefits to your municipality.

“This is a brand new program for West Liberty,” Brooks said. “We’ve learned a lot from our friends in Muscatine who have been a part of the Sister Cities program for decades so we’re really excited to start that program and the community is having their very first meeting next week.”

The first meeting will be about how the group will operate and where in the world they would like to have a Sister City from, he added.

The last announcement Brooks made was about how WeLead started a podcast called “West Liberty Building Together.” The podcasts were done in July and August and another one will premiere at the beginning of September, Brooks said. He played a couple of selections from the podcasts to let everyone know what they were like.

“It’s a temporary visa program so they’re only here until the end of the year,” she said.

Everyone is currently living in Iowa City but they’re coming to West Liberty to work to help with the worker shortage at the plant, Heick added. In February, more team members will be coming to work on a more permanent visa program.

Anna Crock, West Liberty Foods Environmental Supervisor, said the company has implemented the Social Accountability program 8,000. The restrooms and break rooms are being updated in the West Liberty facility.

He said the school district hired 15 new teachers for this school year, which average state wide.

There was also a lot of school supplies donated this year, Kruger added. They have been distributed to each building. If someone needs school supplies they’re urged to contact their student’s school building.

New staff was scheduled to begin Aug. 15. All staff returns Aug. 18, he added. Aug. 23 was the first day of school for students in first to 12th grade. Kindergarten and pre-kindergarten started Aug. 24.

Santos Saucedo, Muscatine County Supervisor, was the next person to give an update to the group. He told everyone the supervisor’s met to discuss requests for the county’s American Rescue Plan Act funds. Funding the county clinic looks to be favorable, he said. Saucedo also said the county was looking into replacing the roof on the courthouse and replacing a sewer line.

West Liberty City Manager Dave Haugland updated everyone on what was going on in the city. He said Brooks was very busy getting agreements done for development projects.

Haugland also announced Ashley Smith was appointed as the newest city councilmember earlier that week but then Jose Zacarias resigned.

“We’ll be going through that same process starting that next week,” he said.

At the city council meeting this week, a couple of public hearings would be held, Haugland said. Some changes to the ATV/UTV ordinance would be made and an event request for the St. Joeseph’s Festival will be recognized during the meeting. On the parks and recreation side of things, the pool closes this week and the project at Wapsi Park is moving along.

Charles Brooke, Chamber Director, spoke after Haugland. He thanked everyone for the successful Fair Parade adding that he heard it was longer than the Hoover Days Parade.

The golf tournament is set for Aug. 25. His board told him to get 18 teams signed up and that goal was surpassed with 24 teams signed up, Brooke said.

Tee off for the golf tournament starts at 1 p.m. with a dinner following afterward, he said.

After the golf tournament, the next big event will be the Holiday Open House, which Brooke is hoping to have Nov. 19 – 20.

“I know we’ve always had it on a Sunday but I want to challenge that,” he said.

He wants to make it a whole weekend event with vendors downtown on Saturday possibly, Brooke added. He has already spoken to a couple of people about this but would like to bring more people to the table to discuss this idea to expand the event.

Also, Sept. 8 – 11 is the 25th annual Children’s Festival, Brooke said. If a business has a window that is open for a puppet to be displayed in and would like that, Brooke said they could contact him.

“We’re all part of it and it’s a big huge West Liberty promotion,” he added.

The next WLBA meeting is scheduled for Friday, Nov. 11. The location will be announced closer to the date of the meeting.