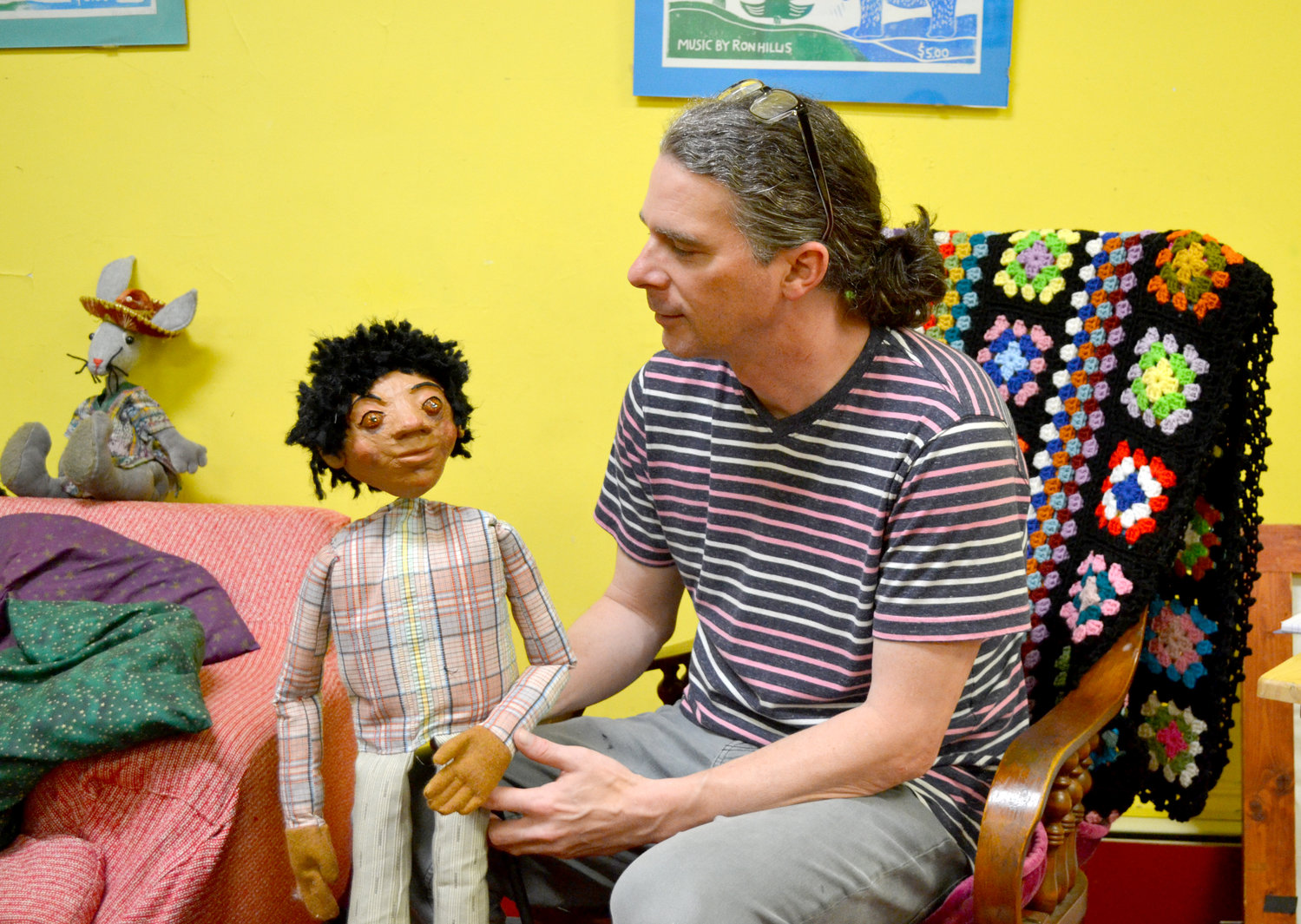 Christopher Eck holds one of the rod puppets from the performance, “Remembering Buxton.”
Xiomara Levsen 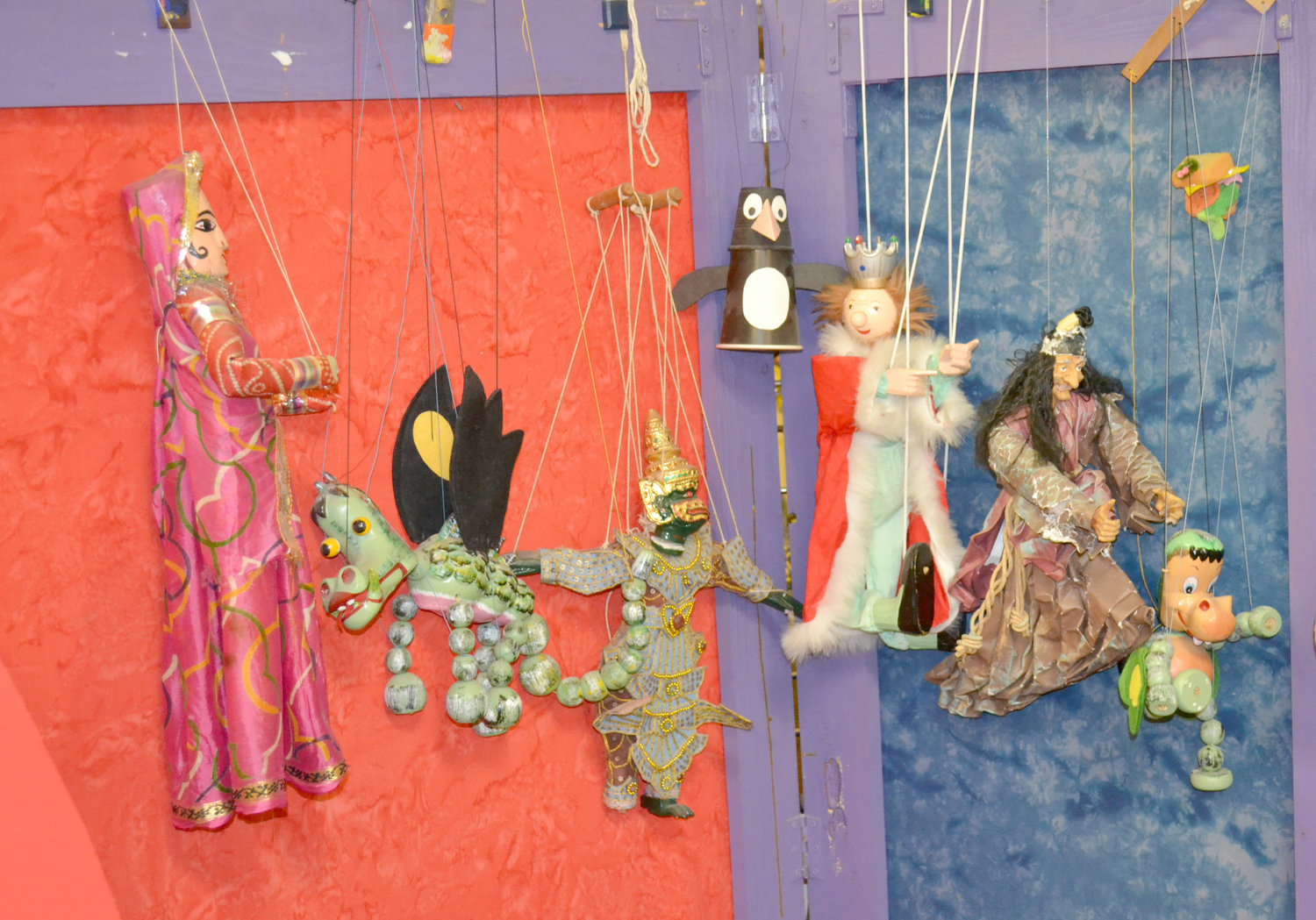 These are some retired puppets Monica Leo made out of Paper Mache and fabric. Leo makes all the puppets for the plays.
Xiomara Levsen 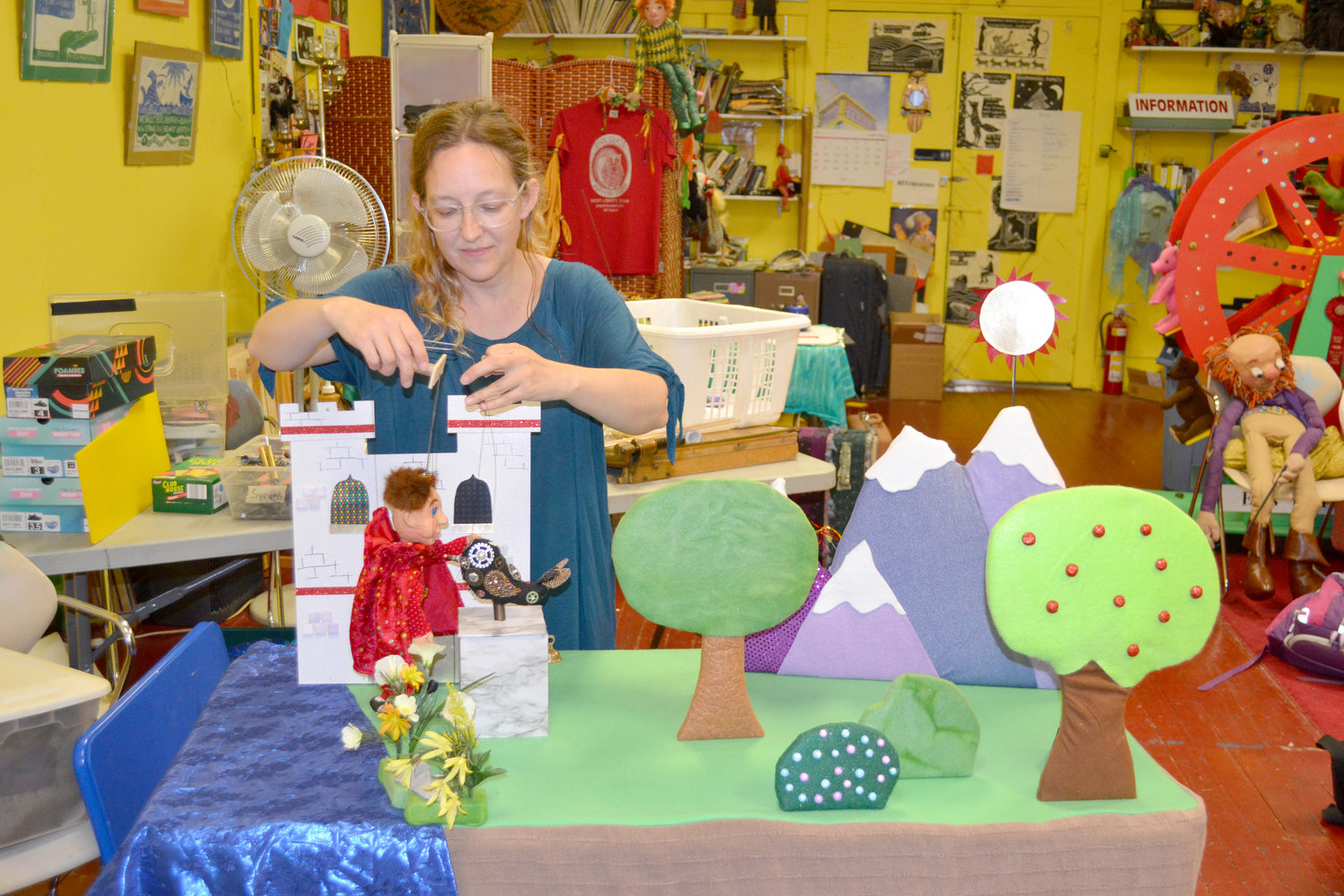 Stephanie Vallez uses a marionette puppet for the tabletop play, " The Emperor’s Nightingale,” which premiered at the beginning of June.
Xiomara Levsen
Previous Next
Posted Wednesday, June 29, 2022 10:25 am
Xiomara Levsen of the West Liberty Index

West Liberty is home to a unique form of entertainment.

The Eulenspiegel Puppet Theater has been in West Liberty since 1995, but started 30 years before that, founder Monica Leo said.

When Leo first started performing puppetry, she said, there weren’t any schools that had a program teaching it, so she taught herself how to handle the puppets and attended a few puppetry workshops.

Now there are a few universities that have puppetry as a program, but it’s still not widely available to study in the United States.

“They kind of come and go, like right now in Ames you can take some puppetry,” Leo said. “You can’t major in it, but you can take some of the classes because one of the people in the drama department is a puppeteer.”

Leo makes all the puppets used for the performances.

“The heads are made out of papier mâché, and the bodies are generally made out of fabric, but you can use anything,” she said. “You either have to make them yourself or you have to commission someone to make them. You can’t buy them off of the shelf.”

Since 2002, Eulenspiegel Puppet Theater has invited community members to come help with a performance. This year the community performance is “Remembering Buxton.”

“It’s about the coal mining town in southern Iowa that was in existence from 1900 to 1925 that was a complete anomaly in its time,” Leo said. “It was 100-percent egalitarian. There were as many blacks as whites in the mine management and the city government.”

There were black doctors who had white patients and black midwives that delivered white babies, she added.

“All of the schools were integrated,” Leo said. “The neighborhoods were integrated, so it was very unusual. There was nothing like it. It was kind of known as the black utopia, and we’re in the final stages of crafting a show about that town in collaboration with Rachelle Chase, who’s a historian that moved from California to Ottumwa because she heard about Buxton and she wanted to research it more and learn more about it.”

Dartanyan Brown, a Des Moines jazz musician whose family lived in Buxton, will be performing live music during the performance, which is supposed to take place July 9 in West Liberty.

“But we need some community volunteers to come and work some of the puppets,” Leo said. “We try to make it as easy and fun as possible. We only have three rehearsals, and then we perform the show.”

Participants won’t have to worry about reciting lines because this performance will be done by narration. Leo will be doing the narration for one of the white schoolteachers in Buxton.

For this show, puppets on a stick, otherwise known as rod puppets, will be used.

“Rod puppets are generally the easiest ones (to use), especially if they’re built so that have only one control and the rest is ambient movement,” Leo said.

There are a couple of other types of puppets the theater uses, including marionette puppets and hand puppets.

“The other style that I find really fascinating that Monica is an expert at is shadow puppetry,” said outreach coordinator Christopher Eck. “They’re two-dimensional puppets that are behind a white light screen that light is coming through.”

What the audience sees is the shadow of the puppet that can have lines or have the story told through a narrator and have jointed movement.

“We’re not using any of them for the Buxton show because we’re doing the show outdoors, and for shadow puppetry you can only do them in the dark,” Leo said. “At least, that’s the way I feel about them.”

There will be a guest puppeteer at Children’s Festival who will be doing a shadow puppet show during the day, so that will be interesting to see, she added.

At the beginning of June, the puppet theater premiered two new shows.

The first one was performed Sunday, June 12, and was called “The Bremen Town Musicians.” Musician Laura Kitrell performed on the piano for the performance.

They also performed a bilingual show called “Uncle Rabbit’s Adventures,” a combination between a Mexican and Puerto Rican story at the Muscatine Art Museum Friday, June 10.

Just like other businesses, the puppet theater had to adapt during the pandemic.

“We had a couple of new shows to work on, so that was nice,” Vallez said. “One of them was the drive-in show.”

The show is called, “Shenanigans: Animals in Charge.” It had stories about what animals did when people went into lock-down during the pandemic.

The puppets were high enough and large enough for people to see them from cars parked in a third row, including an alligator that was spotted in a deserted shopping mall in Myrtle Beach, S.C.

Usually, puppet shows will be 40 to 45 minutes, she added.

Another show they performed during the pandemic was about the life of Marc Chagall for the Muscatine Art Museum.